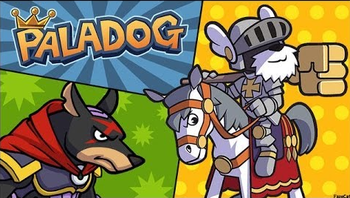 is a Web Game by fazecat where you play as the heroic Paladog. Set in a far future where animals have replaced humanity, the peaceful animals unite under Paladog to repel the evil creatures attacking Critterland.
Advertisement:

Unlike most 2D army games, your character lacks a home base, and instead uses Paladog's HP as your HP bar. Paladog has a holy Aura that buffs friendly units within, giving them a Status Buff and allowing them to perform a Special Attack that's more powerful than their regular attacks.

Has been released for the iOS and Android, with extra content containing a new playable character, Dark Dog.