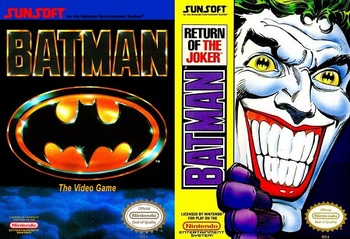 A series of Licensed Games published by Sunsoft, pitting Batman, the Caped Crusader of Gotham City, against his nemesis, the Joker.

Of these six games, all but one were Platform Games; the Japan-exclusive PC Engine game turned into a Maze Game instead. The first four were all based on the contemporary Batman movie (which was independently adapted into a computer game by Ocean Software and an Arcade Game by Atari Games). All six games featured Batman's trademark Batarangs as either a primary or alternate weapon. (In Return of the Joker, Batman uncharacteristically carried a gun as his primary weapon.)

The NES version of Return of the Joker (whose graphics were advertised "as hot as 16-bit") was also ported to 16-bit consoles, with the title altered to Batman: Revenge of the Joker (presumably to avoid confusion with Batman Returns). Sunsoft outsourced both of these ports to American studios: the Sega Genesis version, released in 1992, was developed by Ringler Studios, and the Super Nintendo Entertainment System version, only a prototype of which was produced, was developed by ICOM Simulations.