The term 'Aboriginal Australians' covers hundreds of nations and groups

with distinct languages, cultures, customs, beliefs and laws. There are also a number of names used to identify groups based on broad geographic regions:

Aboriginal peoples have the oldest continuous culture in the world. While there are varying estimates as to how long they have lived on the continent, current research shows that they have occupied mainland Australia for at least 65,000 years, indicating that their ancestors were among the earliest groups to leave Africa. As a result, they have an older claim to the land they currently inhabit than any other population known.

Since colonisation, there have been sixty-seven definitions of Aboriginality. In the past, definitions

were based on racialised categories called blood quantums and laws affecting Aboriginal peoples' daily lives were applied according to the relative colour of individuals' skin and 'degree of Aboriginal blood'. This included policies of child removal between the 1900s and 1970s, in which Aboriginal and Torres Strait Islander children of mixed descent were taken from their families with the objective of integrating them into white society and 'breeding out' their Aboriginality. The intergenerational trauma experienced by these Stolen Generations, their families and communities continues to be felt to this day.

Referring to Aboriginal people by degrees of blood thus remains highly offensive. While each community has their own means of community identification, for government purposes the current definition of an Aboriginal person is somebody who is

Aboriginal peoples are are a well-known fixture of the world's perspective of Australia.

Australian Aboriginals are also often an awkward subject for Aussies, due to a long history of white-dominated government actively discriminating against them. Students studying Australian history have been known to describe it as "200+ years of Aboriginals getting fucked over", when confronted with the fact Aboriginals have been disregarded, feared, abused, exploited, and generally treated with hostility by European colonists. The popular European conception of Aboriginals tells enough of a story: Starting as noble savages during the early years of colonisation, then shifting to uneducatable barbarians as the colonists started wanting more land and outright supplanting them. By the time of the late 1800s, where colonial power was consolidated, Aboriginals were pretty much completely absent in all depictions of the Outback, including the legendary poems of Banjo Paterson and contemporaries, and the official attitude was that they were a 'dying race' and whites could only 'smooth the deathbed pillow'.

During the 20th century, the government policy towards them was, effectively, genocide

), with efforts made to eradicate their culture, language, history, heritage, and general assimilation into a supposedly more 'enlightened' (read: white) way of living - on top of, of course, good old fashioned massacres

. In the 60s, Aboriginal activists became increasingly associated with the 'Black Power' movement in the United States of America. One activist, Charles Perkins, was even dubbed 'Australia's Martin Luther King' by a US commentator. Aboriginals slowly gained many of the rights and recognition they fought for, and have become recognised as an inseparable part of Australia as a culture, a nation and a place, but many, many problems still remain to be solved.

Today, the subject and issues of Australian Aboriginals continue to be a difficult, sensitive and touchy issue amongst Australians, especially white ones, which still urgently needs discussion. Aboriginals have, on average, a life expectancy twenty years shorter than that of the many other races in Australia, being particularly afflicted with heart and liver problems linked to rife alcoholism in the community. In 2008, Prime Minister Kevin Rudd officially gave a national apology to the Stolen Generations (mostly likely encouraged by the previous Prime Minister's well-known refusal to do so) meant to indicate a change in national policy towards Aboriginals. Since then there has been a concentrated effort in regards to racism (notably centered on former AFL player and Australian of the Year Adam Goodes) as well as varying degrees of acceptance from both races.

At last count, according to government statistics, there are estimated to be about half a million Australian Aboriginals living in the country. This accounts for less than 3% of Australia's population. Many live in remote communities. The Northern Territory has the biggest population of Australian Aboriginals on the continent (around 30%). The first Indigenous leader of a state or territory, Adam Giles, became Chief Ministernote which is the equivalent of an American state Governor of the Northern Territory in March of 2013. Many Australian Aboriginals are of mixed White and Aboriginal descent to varying degrees, but this is rarer in the more northern and central populations. Aboriginals in media are somewhat rare, although more common than other non-White Australians.note  Asian Australians comprise 12% of Australia's population for example, but are less likely to have appearances or central roles in fiction Foreign-written portrayals of Australia tend to consider them interchangeable with the standard Magical Native American, which some Australian works are also prone to. Others range from the Noble Savage take to attempts at more nuanced and realistic representations of native Australians.

It's notable to point out that most of the films mentioned star David Gulpilil in some capacity or another.

. It is one of the oldest built structures, a series of artificial lakes and channels that Indigenous South Australians used to capture, harvest, and store eels, and even had relatively large villages around.

Depictions of Australian Aboriginals in fiction: 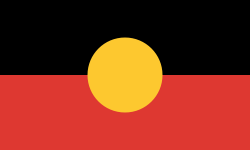