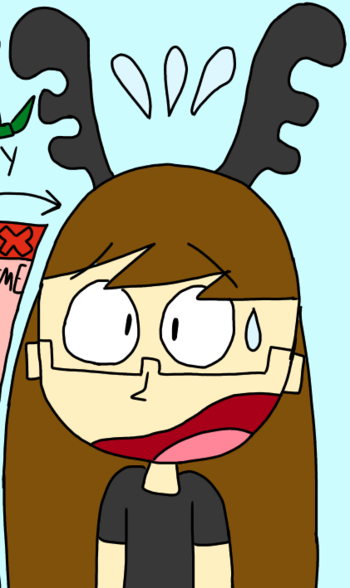 Here's a little somethin'-somethin' of an introduction'.

'Round and 'round these nets I go by the little name of Arimo, or Arimo the Reindeer, if you will. Or heck, even アリモ will do, too. To avoid Viewer Gender Confusion, let me say I am in fact a woman or a lady or a person of the non-male gender. Also, I am only a mere 19 years of age.

I've been reading TV Tropes for quite a while, and one day, I decided to sign up with the sole purpose of adding a page for Tensai Bakabon. However, I am enjoying the massive community a lot, so I am here to stay! You can see me around the forums in the Forum Games and Yack Fest sections, but if you're lucky, you might find me someplace else.

You may know me as that weird weeb who likes old children's anime and the Showa era way too much.

Oh, and bolded things indicate they are my super duper favorites!

arimothereindeer's interests include, but are certainly not limited to:

You are not immune to commercialism.
Kids these days with their anime and mangos.
Dem movies, cartoons
Dem movies, with boring real people

Yeah, I read! Sometimes...
Musique....Musique....
Very much subject to change because I’m trying to expand the music I enjoy! As for genres, I mostly like French house, acid house, italo disco, gabber, happy hardcore, Frenchcore, eurobeat, and stuff of that nature.
Violence Simulators
You’re goin’ surfin’ on the Internet!(animation, comics, etc.)
CARTOONS!
Other stuff

Tropes that apply to me

If you’re not here, I couldn’t think of something for you yet. Sorry.
Leitmotifs

These are characters from Akatsuka manga or anime that are one offs, whose stories I decided to continue, extend, or in some cases, completely create!
The Hatabous

One of The Hatabous, Jo is an intelligent assassin. Unlike the rest of the Hatabous, he can suppress his "dajo" verbal tic, although sometimes he may let it slip on accident. He finds the tic infantile and cutesy, which is why he tends to avoid using it. Although he is rather tough compared to most of the gags from Akatsuka Town, he tends to overestimate his power. He tends to act like as much as a badass as he possibly can to separate himself from the rest of the overly cute Hatabous. His text color is black.

The second Hatabou, Frank is an "American" singer who uses his nationality as a marketing technique in Japan. In reality, he knows very little about American culture, as much as he pretends he knows. As you may have guessed, he is not actually American either, he just finds it a fun thing to pretend to be. Just like the normal/default Hatabou, his favorite foods are hamburgers and American dogs. His text color is green.

The third Hatabou, he is a bit of an outcast and is only classified as a Hatabou due to his hairstyle and facial features. However, unlike a normal Hatabou, he does not wear a flag on his head, but a beach parasol instead. He doesn't naturally have a dajo tic either; he just pretends to, and occasionally forgets to add it to the ends of his sentences. He is actually less familiar with the sextuplets than he is with close neighbor Bakabon. Parabou lives on a beach resort and wears only swim shorts. His hobbies include sunbathing, collecting seashells, swimming, surfing, and making sand castles. His text color is blue.

Robomatsu is a clone of the sextuplets built by Iyami. Despite having independent thoughts, he never goes against orders given to him by his Master Iyami. Robomatsu's purpose was to wreak havoc across Akatsuka Town, putting blame on the sextuplets because he looks exactly like them. He has a rather warped idea of what the sextuplets are like, due to how Iyami describes them to him. Whenever describing them, Robomatsu tends to describe the sextuplets as the most vile, wretched, disgusting creatures ever. He is nearly mute and can only say "pika", but he is very thoughtful. After his combustion and repair, Iyami forgot all about him and threw him in the closet, but he still lives. His text color is gray.

Usomatsu is a foul-mouthed Osomatsu lookalike from the Kansai region. Commonly mistaken for Osomatsu, Usomatsu has taken an absolute hatred to him and the rest of his brothers. Usomatsu also has a twin brother [who I have yet to name] that is a doppelgänger of Choromatsu. Usomatsu, similar to Robomatsu, also mimicks the real sextuplets, but in this case out of spite, not from orders. It is somewhat easy for him and his twin to be differentiated from the real deal, though, because they both have incredibly thick Kansai dialects! His text color is red.

Kashitaro, also known as I-Borrow, is a Bakada University graduate and one of Bakabon no Papa's kohai. Back in his college days, he made a lot of loans to friends, and now he's on a never ending quest to retrieve 700 yen from anyone he ever lent money to. It seems he has forgotten who he has loaned to and tends to claim to literally everyone that they owe him money. Good thing he doesn't charge any interest! His text color is purple.