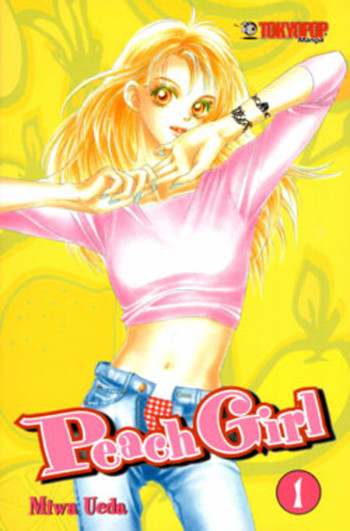 Momo Adachi has had a crush on Kazuya "Toji" Tojigamori for years, but has kept it a secret on account of a rumor that Toji considered dark skin and blond hair to be a turn-off. Her first time telling someone about this crush is during the course of turning down Kairi Okayasu, unknowingly within earshot of Toji and Sae Kashiwagi. Toji confesses his love to Momo, they get together, Sae uses assorted Magnificent Bastardry to try to break them up and generally make Momo's life miserable, Kairi consistently proves a Spanner in the Works to Sae's schemes, and Momo starts falling for Kairi.

It only gets even more confusing from there.

Written and illustrated by Miwa Ueda, Peach Girl was first published in Kodansha's Bessatsu Friend magazine from 1997 to 2003 for a total of 72 chapters. The manga was first picked up by Tokyopop for an English-language release in North America, but after its shutdown, Kodansha Comics USA acquired the rights to publish it. A TV drama aired in Taiwan in 2001. The anime was produced by Studio Comet and aired in early 2005 on TV Tokyo for 25 episodes; it was licensed by Funimation in North America. A live-action film, directed by Koji Shintoku and starring Mizuki Yamamoto as Momo, was released in 2017.