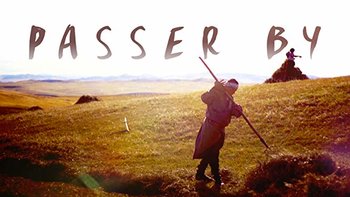 Passer By (Yavuuliin Khun) is a 2017 film from Mongolia, directed by D. Bayarsaikhan.

A man named Sukhee arrives in Ulaanbaatar after three years away as a worker in South Korea. He soon discovers that his ex-wife has left the city for good, headed for the countryside, with their son. He then hitches a ride to his brother's yurt in the countryside, where it is revealed that their father has just died.

Sukhee's brother Sainaa still lives the life of a traditional nomadic Mongolian herder. After paying a visit to their father's grave, Sukhee helps his brother with baling hay and driving the family's herd of sheep. They visit the neighboring nomad family, consisting of elderly Jaajaa and his extremely good-looking daughter Ariunaa. Sainaa tells Sukhee that he's sweet on Ariunaa and hopes to make her his bride. But as it happens, romantic sparks start to fly between Sukhee and Ariunaa.