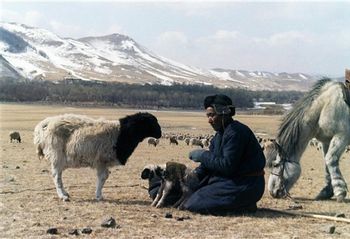 My Beautiful Jinjiimaa is a 2008 film from Mongolia. Jinjiimaa is a deaf-mute who lives as a nomad on the Mongolian steppe. Sukhee is her companion, a middle-aged man with a lame leg; they are forced together because they are both social outcasts. Jinjiimaa is raped by the local Communist Party chairman, whereupon she shoots him but doesn't kill him. Sukhee takes the rap for the shooting and spends six years in prison. Upon his release he goes back to Jinjiimaa, but they can't escape the past.

The film is somewhat handicapped by the No Budget Mongolian filmmaking, but buoyed by strong performances. It's also a Tear Jerker, so bring your kleenex.