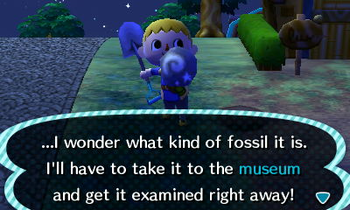 In some Role Playing Games (and Roguelikes in specific), a Dungeon Crawling party may obtain items whose exact identities and purposes are a mystery at first — the characters don't automatically know what these items are supposed to be, and (more importantly) the game doesn't tell the player either; it's labelled as an "unknown" or "unidentified" item or given an extremely generic descriptor like "a red potion" or "a scroll labelled 'FOOBIE BLETCH'" (as opposed to the usual "Healing Potion" or "Scroll of Fireball"). The task of divining the true identity of these items is the purpose of another item, a special skill, or an NPC specializing in identification/appraisal/whatever-you-call-it.

This can be justified for certain kinds of items, like potion bottles (whose labels may be the only clue as to what's inside), or items that are stored/hidden inside a generic container. Until it's been identified, all the item really does is occupy space in the player's Inventory Management Puzzle, which (depending on the size of said inventory) may require the player to decide whether it's really worth lugging around twenty extra pounds of useless inventory in the hopes that it turns out to be more than just Shop Fodder, or if it's something they can safely toss out and/or come back for later (without it getting lost).

Whether or not the player can use an item before getting it identified varies — do you really want to take the chance that the random glass bottle with purple goop you just picked up turns out to be a Healing Potion and not deadly poison, or that a shiny-looking sword is actually a useful weapon as opposed to one that's rusty and Better Off Sold (or worse, harboring a nasty — and usually clingy — curse?) Some games won't let you use or equip the item at all until its true nature has been identified; others will let you do so at your own peril (but will usually disclose the item's true nature after the fact if you do).

Fortunately for you, sometimes you can figure out clues to the item's nature without having to actually use it (based on secondary factors, like the item's size/weight or where it's sorted in your inventory screen). For example, in some games an unknown item's description (icon, Flavor Text, etc.) is consistent between all items of that type, so if one unidentified 'blue potion' refills your Mana Meter, there's a good chance that any future 'blue potions' will do the same. Likewise, if a game collates the player's inventory by item type and quantity (e.g. "Blue Potion x2" instead of "Blue Potion" A and "Blue Potion" B) then this implies that they are two of the same item. And if it's an item randomly dropped/found off a defeated monster, there's a good chance that other monsters of that type will drop the same item. But none of these are guaranteed! — it depends on if the game decides the item's true properties when it's first acquired or when it's actually used. And since unidentified items go hand in hand with Randomly Generated Loot and Randomly Generated Levels, these properties may be assigned randomly to begin with, where knowledge from one play session may not help you in the next: e.g., drinking a blue potion from Dungeon A may heal you, but the apparently identical blue potion from Dungeon B might make you breathe fire instead.

This is Older Than the NES, with roots in Tabletop RPGs where items may have hidden properties known only to the Game Master unless/until discovered by the players.

Note that this does not necessarily apply to items whose unidentified nature is a plot point — video games generally keep plot-relevant items (identified or otherwise) in a category separate from the regular inventory items.