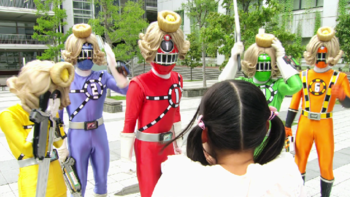 "Wiggy Rangers! And my hair has bounce!"
Ah, ToQger. A Sentai that runs off of themes of imagination, colour, True Companions and Rule of Funny. Especially the latter, if the below moments are anything to go by. Kyoryuger vs. Go-Busters
Advertisement:

Station 4: Be Careful Not to Lose Anything

Station 6: What Are We Looking For?

Station 9: Love is a One Way Ticket

Station 11: The Emperor of Darkness

Station 17: The Sky After the Rain

Station 22: Birth of the Empress

Station 25: Right Out of a Fairy Tale

Station 26: The Fire that Started in the Bathhouse

Station 29: The Meeting with the Oncoming Train

They Went and Came Back: Ressha Sentai ToQger - The Super ToQ #7 of Dreams