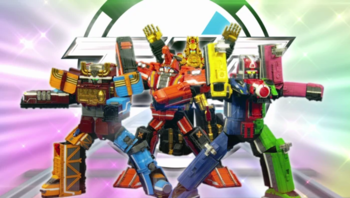 "SHUPPATSU SHINKOUUU!!"
Imagination can be a powerful thing. As the ToQgers are more than happy to demonstrate on many occasions.

Station 4: Be Careful Not to Lose Anything

Station 6: What Are We Looking For?

Station 9: Love is a One-Way Ticket

Station 11: The Emperor of Darkness

Station 17: The Sky After the Rain

Station 29: The Meeting with the Oncoming Train

Station 39: The Beginning of the End

Station 45: The Home We Left Behind

They Went and Came Back: Ressha Sentai ToQger - The Super ToQ #7 of Dreams