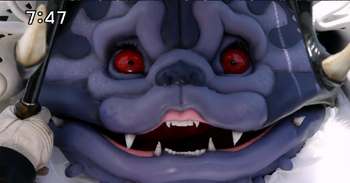 This, this is the face of a sleep paralysis demon, and I love it.
A Lighter and Softer Sentai series? Oh yes! But whether implicit or explicit, this series is unafraid to prove that it isn't all sunshine and rainbows... Starting Station: Let's Go on the Express Train
Advertisement:

Station 22: Birth of the Empress