Characters / The Ruler Of The Land Sinji 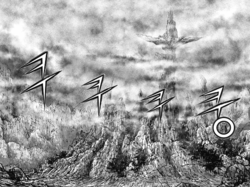 Sinji, literally means "Divine Land" (Vietnamese: Thần Địa), is the mysterious martial art sect that is behind many recent turmoils in the Murim. It is located near the Eastern Region, surrounded by two mountain belts, the first one protects its territory and the second one is smaller and protects its dwellings. The entrance to the first belt is hidden, which is one of the reasons why not many people know about its existence and exact location. The second belt main entrance is heavily guarded by an automated defense system and Sinji's warriors.

Sinji was founded 300 years ago when 8 clans, each specializes in a branch of martial art, gathered to discover new boundaries of martial art. However, their cooperation soon turned into rivalry and then all-out war. Each clan created a powerful artifact called Sacred Treasure to compete and find out which clan owned the most powerful treasure. Eventually, the Clan of Sword (or Geomjong) defeated the other clans and united Sinji under their banner around 100 years ago. Their leader, called Geomjon (it is a title, not the actual name, which is roughly translated to "Sword Supreme"), became the ruler of Sinji. Geomjon ordered the Treasures to be destroyed, only the Ma Ryong Sword remained because it was the heraldry of Sword Clan. They failed to destroy the Treasures and somehow let them loose in the Murim. The united Sinji then turned their eyes to Murim and intended to conquer it but was stopped by the masters of the Treasures, led by the master of Flame Dragon Blade, Po Mun Geol. Sinji has remained in the shadow ever since, constantly improving their skills and planning for the next invasion. They planted many spies in both Jongpa and Sapa, using wealth and power to lure many martial artists into their fold and stirring conflicts between Jongpa and Sapa. It is only a matter of time before Sinji commences their full invasion into Murim and turns the world into a sea of blood.

Sinji has a complete power structure, with the Geomjon as the supreme ruler. Below him are the Elders, leaders of the Clans that made up Sinji. Assisting the ruler in day-to-day operation are the Three Palaces: the Heavenly God Palace, the Earthly God Palace and the Brilliant God Palace, each headed by a master. Sinji's main military force are the 10 Thounsand Sword Brigades, each headed by a powerful swordman.

Sijin's martial arts are on a different level compared to the martial arts of Jongpa and Sapa, with many exotic and dangerous techniques exceeding human capacity. Their warriors are extremely powerful, even the foot soldier is on par with a competent Murim martial artist. The life of a Sinji warrior is short and violent, if they show no improvement in martial skills they will be discarded immediately.

open/close all folders
Sinji as a whole
Eight Sacred Treasures/Bát Đại Khí Bảo
Eight powerful weapons created by the Eight Clans of Sinji. They are sentient and purposely choose their masters, not the other way around. Each has many special powers that could be unlocked if their masters manage to "awaken" them. There are two stage of awakening, the first one is normal awakening, and the second one is true awakening. A normal awakening will let the user use some of its power, while a true awakening allows for full access of its power.

According to a pact between the legendary Flame Dragon Blade's master Po Mun Geol and the ruler of Sinji, anyone who posseses at least 4 out of 8 Treasures can gain entrance to Sinji.

Seven of eight Treasures have been revealed. 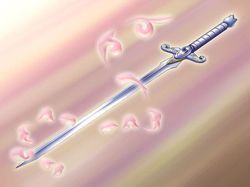 Called "Flower Fairy Demon Conquering Sword", or just Demon Sword, Ma Ryong Sword is the heraldry of Clan of Sword. Like its name suggests, it has the power to vanquish evil spirits. Sword Demon used the sword to wreak havoc to the Murim 20 years ago. Dam Hwa Rin is its current user. 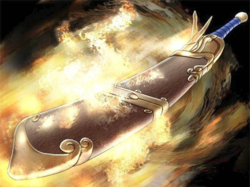 The heraldry of Clan of Bow. Its current owner is Me Yujin. The master of Hyonmu Heavenly Bow is called Gungjon and automatically becomes the leader of Clan of Bow. It can sense and allow the user to see others' Ki from far away and can also shoot Ki arrows.

One of the Eight Sacred Treasures, it's possibly the heraldry of Clan of Illusion (or Hwanjong), since its main power is increasing its master's Ki over time by wearing it. Song Mu Guild took possesion of the armor after raiding a minor Sapa Guild. Yu Won-chan gave it to Dam Hwa Rin as a gesture of gratitude. Its current master is Dam Hwa Rin. 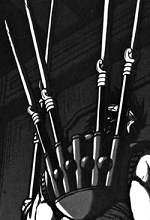 The heraldry of Clan of Spear, its current master is Noho. The user can control it telepathically, make it fly or change direction mid-air. 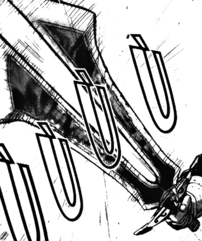 The only Treasure that is still in Sinji's possession, Gwe Myeong Sword is the heraldry of Clan of Sound. It has demonstrated two abilities: the ability to emit sound waves to disorient the enemies upon impact and the ability to deflect energy back to the attacker. It was used by Jadam to fight Noho and Han Bi Kwang. After Jadam's defeat, Sa Eumin took it back to Sinji. 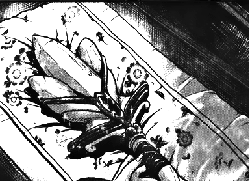 Its original clan is unknown, the staff has become Eastern Tribe's sacred relic, its master will become the leader of Eastern Region and inherit the title of Saisung (roughly translated to "Killer Star"). Its current user is Mi Go. The staff has extraordinary healing power, it can heal all kinds of injury no matter how severe and at full power can bring back the dead.
Ruler of Sinji/Thần Địa Chi Chủ
Often called "that person" by his underlings, this enigmatic figure rules over Sinji with an iron fist. The ruler of Sinji is also the Geomjon, leader of Clan of Sword. He forbids the use of other weapons and make sword the primary weapon of Sinji warriors. 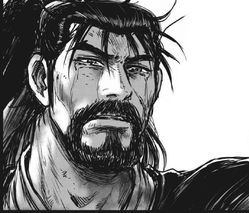 The ruler of Sinji and Han Bi Kwang's father. He was chosen as the next ruler of Sinji and sent to Murim 20 years ago by the late ruler of Sinji to scout the capability of Murim. He challenged and killed many Murim warriors and made himself quite a bit of enemies, earning the title "Geum Ma" (Sword Demon). Eventually, he met and fell in love with a beautiful woman called Hui Yeon and married her. Han Bi Kwang was born as a result. The family settled in a remote place and after 10 years, it seems that he could leave his past and live a peaceful life. However, some of his enemies tracked him down and took his wife and son hostage. He agreed to surrender in exchange for their lives but his enemies killed his wife anyway. Enraged, he massacres them and bring his wife back to Sinji to heal her, leaving his son Han Bi Kwang in the enemies' hand. After some time, he returned to rescue Kwang, but chose to erase Kwang's memory, planted false memory about Kwang's parents are hunters who were killed by a bear and imposed a condition in his mind so that he would flee if facing danger, hoping that Kwang will never get involved with the martial art world. He then returned to Sinji to become the next ruler.

Han Sang Wu made a deal with Jaha Masin, the true ruler of Sinji: Jaha Masin would heal his wife and in exchange he gave his body to Jaha Masin to inhabit. His actions in the series so far are Jaha Masin's. 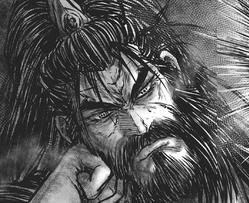 The true ruler of Sinji. Several hundred years ago, a heavily wounded man arrived at Sinji. He practiced a dangerous martial art and was wounded as a result, so he traveled to Sinji hoping that their arts could cure him. Fascinated by his tale, the warriors of Sinji took him in. There he discovered the immeasurable amount of knowledge Sinji had amassed and immediately entranced. He wanted to absorb all that knowledge and become the most powerful warrior in the world. However, learning that much takes time, and human life is finite. He found a way: by learning the Soul Transfer technique, he managed to pass his soul to another person after his body became frail and weak with age, then continued his research. By jumping from body to body, he eventually reached the pinnacle of martial art and became the ruler of Sinji. His goal is simple and clear: destruction and suffering. He chose Han Sang Wu as his successor and bearer of his soul and planned the same fate for Fung Yeon.

He invented Jaha Singong, the notorious martial art that sets in motion the Ho Hyub Gok arc. He is also the former master of Ma Ryong Sword.

Three Palaces/Thần Các
The Heavenly God Palace, The Earthly God Palace and The Brilliant God Palace are in charge of daily operations of Sinji. There exist fierce rivalries among the palaces, each sought to undo the others and gain the favour of the ruler of Sinji. Each palace is headed by a master. Their organization and structure are unclear. 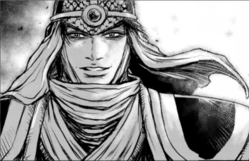 Master of Heavenly God Palace and notorious jackass. Rank No.12 in fighting power in Sinji. He has a fierce rivalry with Zhong Li, the master of Earthly God Palace.

Master of Earthly God Palace, ranked No. 20 in fighting power. He is in charge of Sinji's agents operating in Murim. A cruel and ambitious man, he aimed to remove the master of Heavenly God Palace and become That Person's right hand man. He was killed by Han Bi Kwang. 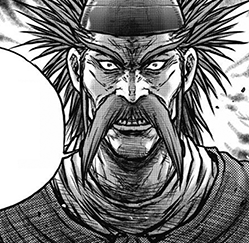 One of the Five Greats, his strength lies in his ability to create complext machines and weapons to use in combat. After witnessing Sword Demon's power, he had a change of heart and defected to Sinji, hoping to discover new limits of martial arts. He was assigned the Master of Brilliant God Palace by the ruler of Sinji. He built a machine called Soul Machines Formation to act as Sinji's defense system, which is strong enough that Sword Emperor himself couldn't pass it.

Eight Clans of Sinji/Thần Địa Bát Tông
Sinji was founded when 8 clans gathered to exchange knowledge about martial arts. Each clan specializes in one branch of martial arts. The clan's leaders form the Council of Elders, the second-highest authority in Sinji after the supreme ruler. Jaha Masin killed them all to absorb their powers.

Seven clans have been revealed. 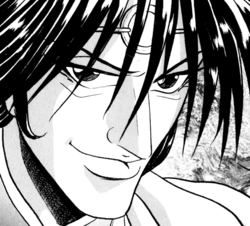 The first warrior from Sinji that was shown in the Manhwa. Ja Seom Pung was tasked with retrieving That Person's martial arts from Murim. He tracked down Yu Se Ha and Han Bi Kwang but was killed by Yu Se Ha in his Ma Gum Rang self. 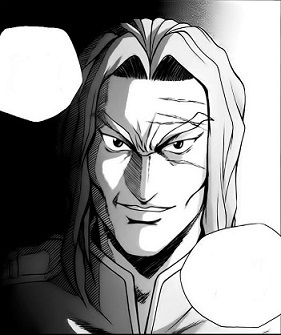 After Ja Seom Pung failed to return, That Person sent Hyol Roe to retrieve Ma Ryong Sword, Flame Dragon Blade and find out what happened to Ja Seom Pung. His skills are a class or two above Ja Seom Pung's. 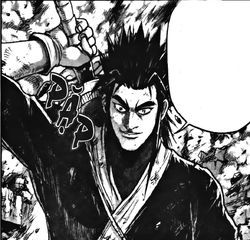 One of the elite swordsman of Sinji, ranked 18 in fighting prowess. He disguised as a mercenary in an escort group in a ploy to destroy the Eastern Region and eliminate the Saisung, their leader. He is killed by Han Bi Kwang.