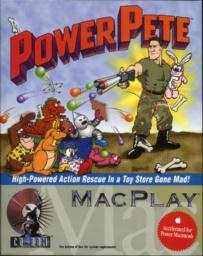 A game developed by Pangea Software, published in 1995 by MacPlay, and bundled with Apple Macintosh Performa computers.

Every night after the last employees leave, the merchandise in Toy Mart comes to life, forming miniature cities. One night though, there is a commotion in the Doll Department: one of the cages in the Stuffed Animal Zoo has broken open, releasing one hundred Fuzzy Bunnies, who scatter throughout the newly formed Toy Mart Metropolis. With their limited intellect, the Fuzzy Bunnies are unaware of just how dangerous their new surroundings are and stand little chance of surviving until morning on their own. Fortunately, Power Pete, the store's best-selling action figure, is more than willing to emerge from his packaging to rescue the Bunnies from the store's hazards, including almost every other toy in the store, most of which envy Pete due to his out-selling them and would love to see him "recalled".

All of the game action is viewed from above.

Pete's default weapon is a gun that shoots suction cup darts, but he can get more powerful weapons in the game (for a final total of fifteen), as well as power-up accessories such as super speed and temporary invulnerability. He can also collect the jawbreakers that appear when enemy toys are destroyed.

The game consists of 15 levels spread over five departments (three per department):

Since Pangea Software reacquired the rights to the game in 2001, Power Pete has been ported to Mac OS 9 and the Classic mode of macOS X as the shareware Mighty Mike. If you have an emulator such as SheepShaver, you can play Mighty Mike on an Intel-based Mac.

All levels of this game provide examples of: