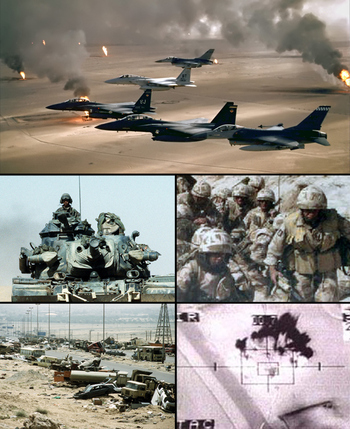 "We have just started a war, it isn't a one day affair. It is not going to be over before the next commercial break."
— Colin Powell, then serving as the Chairman of the Joint Chiefs of Staff, explaining the timeframe for the war

Note: This article is about the 1990-1991 war in the Persian Gulf and Kuwait, also known as Operation Desert Storm. If you are looking for what some refer to as "Gulf War II", then please see The War on Terror. In fact, that is the third Gulf War and this is the second: The Iran–Iraq War of the 1980s was originally called the Persian Gulf War because of its impact on shipping.

The Cold War was all but over by 1990, but the first Gulf War served as a demonstration of what the United States could have been capable of if things had gone hot in the 1990s or later. While Iraq used obsolescent export-quality Soviet equipment and some of its officers received training in the USSR, their forces were both grossly outnumbered and outclassed and did not use Soviet Operational Art. It is interesting to note, however, that many casual analysts and military fanboys see the poor performance of the Iraqi military's Soviet-produced equipment as definitive proof that the USA would have won the Cold War in Europe if it had been a conventional conflict — this is in large part due to their enthusiasm for equipment and weapons at the expense of boring and irrelevant things like actual strategy or logistics.

On 2 August 1990, Saddam Hussein, interpreted a comment by U.S. Ambassador April Glaspie ("we have no opinion on the Arab-Arab conflicts, like your border disagreement with Kuwait") as a green light to launch a military invasion of Kuwait, a small emirate that borders Iraq.note Glaspie would later claim that she had given no ambiguity in her statement, but for better or for worse, that's how Hussein interpreted it. He also thought that the Soviet Union would veto any attempt to take firm diplomatic action. He figured very wrong.

The initial U.S. and allied move was to increase the defense of Saudi Arabia, moving aircraft there in case Saddam tried to make a move on that country too. That operation was referred to in America as Operation Desert Shield. UN resolution after UN resolution calling for an Iraqi withdrawal were ignored, and the U.S. built up a coalition of 34 countries—the final total buildup of troops was over half a million, and six U.S. carrier groups were involved. With a troop drawdown happening in Europe, the U.S. was free to shift over an entire corps-sized formation from Germany to the Middle East.

For all that, though, the U.S. almost did not enter the war. Iraq had the world's fifth-largest military and a very capable air force (on paper, at least). Remembering Vietnam, many U.S. legislators were very reluctant on the issue. Kuwait hired a PR firm and had a woman testify before the Senate that Iraqi troops had removed babies from incubators and left them to die. It was completely false. That and other atrocities that did occur proved enough to get the resolution approving the U.S. involvement passed.

On 29 November 1990, the United Nations Security Council, by a 12-2 vote (China abstained; Cuba and Yemen were against; the Soviets actually voted in favor), passed Resolution 678, which stated:

Authorizes Member States co-operating with the Government of Kuwait, unless Iraq on or before 15 January 1991 fully implements, as set forth in paragraph 1 above, the abovementioned resolutions, to use all necessary means to uphold and implement resolution 660 (1990) and all subsequent relevant resolutions and to restore international peace and security in the area;

That meant, "Get out of Kuwait or face war." Saddam didn't get out, so he faced war.

On 17 January 1991, Operation Desert Storm began. Iraq possessed one of the densest air defence networks in the world, which was centered around a French air defense system named "Kari". It basically lasted one night due to the Americans' secret weapon. Okay, the F-117 had already been revealed and taken part in the DEA operation that was Panama, but that had been easy. This was harder, and it proved itself. An EF-111 got a kill without firing a shot, B-52s set the world record for a long-distance airstrike by flying from the U.S. to Saudi Arabia, firing cruise missiles, and going home, and Iraq's air defenses were crippled. Iraqi fighters didn't do much better. Some pilots ejected when they saw the enemy, and eventually the Iraqi Air Force left en masse for Iran, who said "Thanks for the planes" and duly confiscated them.

The Gulf War was notable for the levels of use of precision-guided weapons. They had not been used to this level before, leading to the war being called the first "computer war". Comparisons of night-vision video footage to video games were abundant for a few years after, including by Terry Pratchett.

Saddam, who understood the psychological impact of ballistic missiles even before they started falling on him, decided to launch modified "Scuds" at Israel and bring it into the war. He hoped to shatter the UN coalition, many of whom didn't like Israel and might balk at helping defend it. U.S. MIM-104 Patriot antiballistic missiles made a go at stopping them, but faced with missiles that accidentally broke up on reentry and Saddam not aiming them at anything, they couldn't do much.

Attempts to find and destroy the launchers in Western Iraq had limited success, mainly because they were mobile. Two future military novel authors along with other SAS members ended up getting captured by the Iraqis while doing this in the Bravo Two Zero mission. Ultimately, Israel was kept out of the war with finesse rather than firearms. Elsewhere, Saddam's forces dumped oil into the Persian Gulf and burnt Kuwaiti oil wells.

After six weeks of air strikes (one of which accidentally killed hundreds of civilians in a shelter), the ground liberation of Kuwait began. The UN forces, led by "Stormin' Norman" Schwarzkopf, then pulled the oldest trick in the book. They made noise in the press about an amphibious Marine invasion from the east, launched a feint attack from the south, and sent the bulk of their forces into the western desert to swing around and cut the Iraqis off from behind. It turned into a rout. A group of retreating Iraqis got subjected to air strikes for several hours, which played badly in the world press. For whatever reason, a full-scale invasion of Iraq did not take place. Kurdish and Shia uprisings against Saddam were brutally crushed. In essence, the United States conducted the sort of offensive that they had planned to defend against.

On 28 February 1991, a ceasefire came into force. Iraqi military deaths were at least 20,000, possibly up to 50,000, while the number of civilian deaths was the subject of much debate. 80,000 Iraqis were taken prisoner and the vast majority of the Iraqi Army's military equipment (several thousands tanks, armored carriers, artillery systems, and so on) were destroyed. 379 UN soldiers had died, but only 190 to enemy fire, with about forty tanks and other armored vehicles lost. In fact, far more soldiers were debilitated by "Gulf War syndrome", a mysterious ailmentnote Explanations offered include Iraqi chemical weapons (particularly fallout from the bombing and demolition of chemical weapons facilities), the pyridostigmine bromide pills given to soldiers as a nerve gas antidote, the pesticides use to keep the bases from swarming with bugs, fumes from the oil well fires, the use of depleted uranium shells and tank armor, side effects from the anthrax and botulinum vaccines, and combat stress. suffered by hundreds of thousands of returning veterans, than by actual combat. And as for Saddam, he was tried for his war crimes and hanged in 2006.

In Moscow, the head of the Voyska PVO, the USSR's air-defense force, had to explain how the Iraqis lost so convincingly. Iraq's weapons of mass destruction were not used because it was made very clear to Saddam that nuclear weapons would follow. This issue would not go away. Iraq would stymie UN weapons inspectors for years afterwards, until the U.S. finally ousted him from power in 2003.

But that, as they say, is a story for another day…