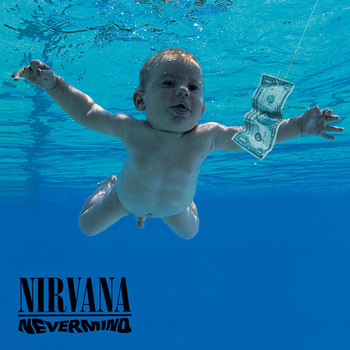 Nevermind is the second studio album recorded by American rock band Nirvana. It was released through DGC Records on September 24, 1991.

This album marks the debut of Dave Grohl on drums, having replaced Chad Channing a year earlier; he would serve as the longest-staying and ultimately final drummer in the band's lifetime. However, Channing did record for one song that made it onto this album before he left, playing cymbals on "Polly".

The album was recorded at Sound City Studios in Van Nuys, California between 1990 and 1991, with Butch Vig serving as producer. It saw the development of the band's sound away from the monochromatic grunge of Bleach into more diverse styles such as the Hardcore Punk fury of "Territorial Pissings" and "Breed", as well as the acoustic balladry of "Polly" and "Something in the Way". Vig had to trick Kurt Cobain on several occasions to accept studio embellishments he otherwise was averse to, such as persuading him to double-track his vocals on "In Bloom" by reminding him that John Lennon did so, and repeatedly claiming he needed new takes to achieve the multiple guitar overdubs of "On a Plain".

According to Grohl, Andy Wallace was chosen to mix the album because the band enjoyed the "heaviness" of his work with Slayer. Wallace's contribution to the album's sound played a part in its success as he improved on the overly gritty, low-budget sound of their debut, though Cobain later expressed some Creator Backlash about the polish of his end product and commented that he made it sound more like "a Mötley Crüe record" than a punk record.

An unexpected worldwide success upon release, Nevermind brought grunge and Alternative Rock as a whole to the mainstream in a way that only the Sex Pistols had done before with Punk Rock; even the band members were shocked to discover they had become rock superstars in only a few months. The album opener, "Smells Like Teen Spirit", became an anthem for a new generation of disgruntled teens, and other tracks like "In Bloom", "Come As You Are" and "Lithium" became immediate hits and eventual classics as well.

To music historians, Nevermind was a key album in rock history. Along with the Lollapalooza tour, it shattered the hegemony of 1980s Synth-Pop and Hair Metal (and, to a lesser extent, teen pop and dance music), transforming alternative rock from an underground cult movement at best into to a household phenomenon. Nevermind specifically has the additional distinction of popularizing grunge in much the same way. Many alternative rock groups of The '90s like Pearl Jam, Alice in Chains, Radiohead, The Smashing Pumpkins, and many others owe their mainstream success to Nirvana.

Sociologists also credit the release and smash success of Nevermind as a turning point in Western culture, being seen as the point where The '90s culturally began. Its direct middle finger to The '80s galvanized Generation X and spurned on a more abrasive, cynical, and sarcastic direction for popular social attitudes throughout the remainder of the 1990s. This was perhaps most prominently symbolized at the start of 1992, when Nevermind knocked Michael Jackson's highly-anticipated and heavily-hyped album Dangerous off the No. 1 slot on the Billboard 200.

However, the success, as massive as it was, became an albatross around Nirvana's neck, happening way too suddenly and dramatically for their liking. The group's later output desperately tried to refrain from too-commercial sounds and subject matter, and Cobain's struggles with reconciling with his sudden popularity became a major contributor to his suicide within three years after this album's release.

A documentary about the creative process behind the making of this album can be seen in the Classic Albums TV documentary series. The album was also added to the National Recording Registry in 2004 for its cultural, historical and aesthetical value. The album was remastered and re-issued for its 20th anniversary in September 2011. This included a two-disc deluxe edition, with the first disc including several B-sides, and the second disc featuring rehearsals and session recordings. A "Super Deluxe" edition added two more CD's; Disc 3 features remixes, while Disc 4 is a recording of Nirvana's Live at the Paramount, a concert the band performed on October 31, 1991, in Seattle. "Super Deluxe" also included a DVD of Live at the Paramount.

A 30th anniversary edition was released in 2021, featuring a new remaster of the album and concert recordings from Amsterdam, Del Mar, Melbourne, and Tokyo.

I'm so happy, 'cause today I found my tropes; they're in this list: