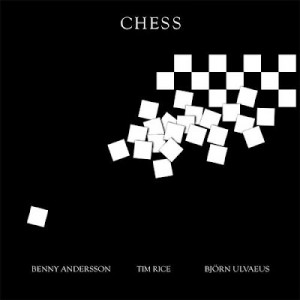 "The game is greater than its players."
"It really doesn't matter who comes out on top, who gets the chop;
no one's way of life is threatened by a flop.
But we're gonna smash that bastard!
Make him wanna change his name!
Take him to the cleaners and devastate him!
Wipe him out, humiliate him!
We don't want the whole world saying
'They can't even win a game!'
We have never reckoned on coming second;
There's no use in losing!"
— "U.S. versus U.S.S.R." (also called "Difficult and Dangerous Times")
Advertisement:

A Rock Opera with music by Benny Andersson and Björn Ulvaeus of ABBA and with book and lyrics by Tim Rice. It was originally produced as a successful Concept Album in 1984, then became a West End production, and eventually reached Broadway. Each version of the show underwent changes in story and music; Rice considers the most recent version, performed in concert at Royal Albert Hall in 2008, to be the official one. A new revival with a restructured storyline was planned to hit Broadway in late 2018, but it only had pre-Broadway trials at Kennedy Center.

The plot of each version has about this much in common: it concerns the World Chess Championships set against the backdrop of the Cold War. There's the brash American champion Freddie Trumper, the reserved Russian challenger Anatoly Sergievsky, the American's second Florence Vassy who switches her affections to the Russian, the Russian's wife Svetlana, KGB and CIA agents (Alexander/Ivan Molokov and Walter de Courcey, respectively) working behind the scenes, and an Arbiter presiding over the tournaments.

Original concept album
Side one

The bars are temples but the tropes ain't free: