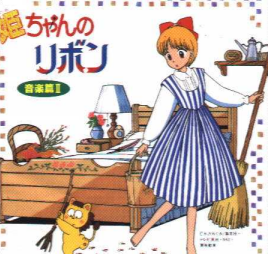 Himeko "Hime-chan" Nonohara is a magical Tomboy with a Girly Streak of the cute witch type who can transform into anybody in the human world for one hour. This is due to her getting a magic ribbon from her alternate universe counterpart Erika, who just happens to be a princess in The Magical Kingdom. For one year, Himeko is allowed to use the ribbon as she sees fit because it is needed for Erika to study the human world. There are a few limitations, however:

Despite the rule that no one must know about her secret, Daichi Kobayashi (Himeko's eventual best friend), is the first one to find about it after a series of incidents she got involved with. However, if anyone finds out about it, they are under the threat of memory erasure for everyone involved. Which, while that would help Hikaru Hibino (Himeko's self-named rival for Daichi's affections) in some ways... if only someone could explain that to her so that she would stop almost discovering the secret.

The original manga was created by Megumi Mizusawa, and ran in Ribon from 1990 to 1994. It received an anime adaptation in 1992 by Studip Gallop, and ran for 61 episodes.

A remake manga entitled Hime-chan no Ribbon Colorful also ran in Ribon from 2009 to 2010. The setting was updated to modern day, and Pokota (the stuffed lion) was replaced by a shape changing Princess Erika (in the form of a cat).