Thou Shalt Not Kill
aka: Thou Shall Not Kill 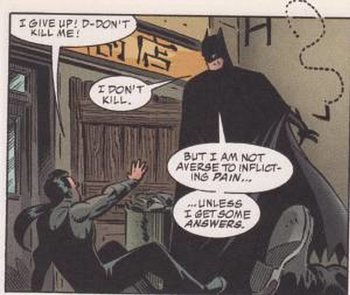 Ending a life is a permanent thing.note Usually. There's no way to say "I'm sorry", or to make up for it later. And for some people, killing is a line they will not cross, no matter how much the death might serve the greater good (or, in some cases, the greater evil). "He needed killing" is not in these people's vocabulary.

This is common in works with Black-and-White Morality, but even appears in works with Grey-and-Gray Morality. In the latter, it's sometimes the only way to tell the "good" guys from the "bad" guys.

Opinions differ on how this applies to sentient life other than humans, or indeed whether it is always more heroic to spare lives. In general, it's still up to villains to kill other villains when pulling off a Villainous Rescue. It's perfectly fine to "kill" immortals though as it is to kill the undead. The Mercy Kill sometimes winds up as an exception. Karmic Death, Self-Disposing Villain, and Hoist by His Own Petard provide alternate ways to kill off villains without forcing the heroes to get their hands dirty.

Thou Shalt Not Kill is closely related to Joker Immunity. Whilst many writers believe a never-kill creed makes the hero more likable and righteous, on another level it might simply be a plot device to prevent the hero from killing off popular recurring villains: the rationale is that if a hero, say, Superman were to kill a bad guy in one story, why wouldn't he simply resolve all of his problems by, for example, incinerating Lex Luthor with his heat vision on sight? Related is Pacifism Backfire, where their reluctance to fight (or to kill as in this trope) may cause Joker Immunity. This trope is more common in serial fiction, such as TV shows and comic books, rather than one-shots like movies. In action movies it is common and acceptable for the hero to kill the villain because there is usually no planned sequel for the villain to appear in. It's also somewhat common for both stand alone and serial storytelling to feature a character who begins adhering to this trope, but over the course of various dramatic devices, such as a Trauma Conga Line, is finally forced to — or chooses to — cross the line.

With superhero characters, attitudes toward no-kill policies range from utterly ignoring it (such as the Main Characters of Watchmen), to treating it as a preferred outcome (such as Superman), to strict adherence to it in all cases (such as Batman). Whatever the moral case is, this trope is often used to show off the hero's incredible precision, whether it be with a fist or a gun. This can include things like separating the mook from their weapon with a precisely aimed bullet, or possibly knocking an opponent out. Whatever the case, their non-lethal attacks are due to their incredible skill. Note that this often a case of Reality Is Unrealistic as many of these attacks are very capable of causing serious injury or death.

If this trope is used poorly, it can risk leading to audiences seeing heroes holding onto this code as too naive or stubborn due to not accepting that there are villains too dangerous to be left alive and possibly lead to the story's Villain Killers looking more heroic than heroes who swear by non-lethal force.

, and the religious implications of taking life in apparent violation of this commandment (which is often translated as "Thou shalt not murder," which results in debates over semantics)note The original Hebrew word used is "ratsahk" which could arguably be better translated as "murder" given that it typically refers to unlawful killing, whereas the word "mut" refers purely to the act of killing without any regards to legality of said killing. are sometimes also invoked in storytelling.

Sub-Trope to No-Harm Requirement where characters for one reason or another are restricted in how much harm they can deal to or allow another being to take, if any. Also very frequently a form of Heroic Vow, though villains can take this stance too.

See also Ape Shall Never Kill Ape, Kick Them While They Are Down, Actual Pacifist, Reckless Pacifist, Technical Pacifist, Martial Pacifist, Non-Lethal Warfare, Would Not Shoot a Good Guy, Can't Default to Murder, and Restrained Revenge. Often goes hand in hand with Doesn't Like Guns, because of the lethal connotations that firearms carry. For a similar trope in video games, see Pacifist Run.

Alternative Title(s): Thou Shall Not Kill