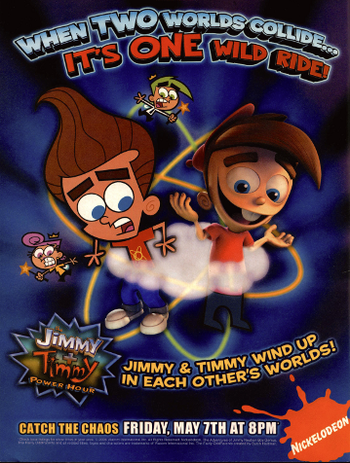 Magic Versus Science, complete with Medium Blending.
Sherman: How could I be talking to a fictional advertising character?
Morgon Salt Girl: Easy. We're both fictional characters. As such, this conversation is a virtual construct in the imagination of the reader.
(Beat)
Sherman: So, did that answer my question?
Morgon Salt Girl: (turns to leave) Yes, it did.
— Sherman's Lagoon
Advertisement:

Alternatively, a single popular character can cross over from one show into an other for a brief guest appearance; this has the effect of attracting that character's fans from the other show without requiring the writing teams to sync up or creating DVD- and arc-unfriendly episodes. This is very common in comic books, in which most characters are part of a larger universe, such as the Marvel Universe or The DCU. It happens less often in TV and movie properties based on comic books, since they are often made by different production companies. Compare Cameo Cluster if the story impact of the crossover is relatively minor.