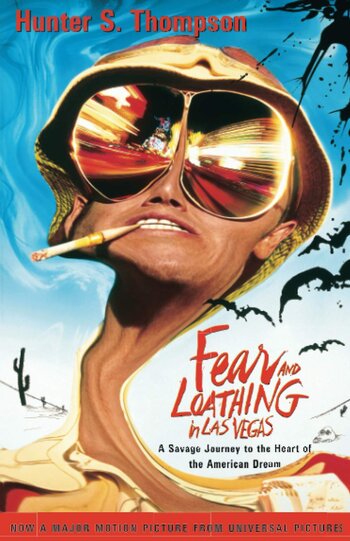 ♫ Too many doses and I'm starting to get an attraction... ♫
"He who makes a beast of himself gets rid of the pain of being a man."
— Dr. Samuel Johnson, as quoted at the beginning of the book, the film and the audio drama.
Advertisement:

"We were somewhere around Barstow on the edge of the desert when the drugs began to take hold..."

Fear and Loathing in Las Vegas: A Savage Journey to the Heart of the American Dream is a legendarily insane book written in 1971 by Hunter S. Thompson and illustrated by Ralph Steadman, loosely based on two trips to Las Vegas that Thompson took "in search of The American Dream". The book was adapted into a 1998 film directed by Terry Gilliam and starring Johnny Depp and Benicio del Toro. An audio drama version was released on CD in 1996, with Harry Dean Stanton (who also had a cameo in the movie) as the narrator, Jim Jarmusch as Duke, and Maury Chaykin as Gonzo.

It starts at the line above and goes downhill from there. The story involves a mad journalist (Raoul Duke, based on Thompson) and his Samoan attorney (Dr. Gonzo, based on Chicano attorney/activist Oscar Zeta Acosta, with nationality changed to protect the innocent guilty) traveling from Los Angeles to Las Vegas to chronicle the Mint 400 desert bike race for Sports Illustrated, consuming many, many illegal drugs in the process. In actuality, Thompson was writing a piece on Acosta and the then-fledgling Chicano-rights movement, and both were glad to have an excuse to get out of L.A. because Acosta's radical friends thought that he was spending too much time with Thompson, a gringo WASP whom they suspected of being a police agent (not at all an unrealistic suspicion in 1970, but also one that happened to be wildly incorrect about Thompson himself).note The piece about Acosta was, in 1971, published in Rolling Stone as "Strange Rumblings in Aztlan." When this falls through, in part due to their severe drug saturation, Raoul attempts to return to Los Angeles, but gets called back into Vegas by Rolling Stone for the National District Attorneys Association's Conference on Narcotics and Dangerous Drugs. He accepts largely out of irony.

The film version follows the book absurdly closely, with the vast majority of content unabridged from the book, dialogue and all. Depp, a close personal friend of Thompson, also gives a spot-on (and very informed) performance.

A plot summary cannot cover the radically unique feel of the book. Largely written in a stream of consciousness, the book covers the tail end and self-destruction of the '60s freedom and drug culture and the beginning of the increasing tightness of the 1970s. As one summary said, it can be said to be an increasingly desperate search for the American Dream in a time where it seems impossible.

Also contains a famous line about Goddamned Bats, though they are not used in the book or film themselves.

Wait! We can't stop here. This is Trope country:

open/close all folders
In the book
In the movie

The question is, as always: Now?