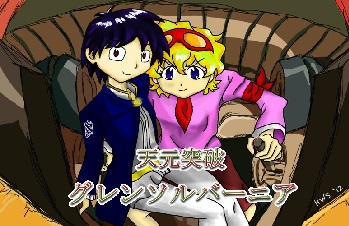 The roles changed, and a lot more stuff!

, is, as shown by the title, a Tengen Toppa Gurren Lagann fanfic. It follows the basic main plot of the anime, while answering an unusual question: What if Nia were born in Jiha and Simon in Teppelin? From this question, a normal-haired, normal-eyed Nia is introduced, and shit goes down.

The fic is already completed, with 36 chapters released plus a posface, and is just as maddeningly insane, if not more so, than its parent show.

Tropes that take place in this fic: