A Jackal, and the protagonist. A young hitman and Bounty Hunter who tries pretty much to survive the best he can in a crime-ridden city. The son of the legendary Grim Reaper Roxy, he wields an enormous blade inherited from his mother after her death.

Unsurprisingly, his line of work garnered him quite a few enemies and, as he later finds out, a thirst for revenge from many of his victims' relatives, notably Huya.

He eventually becomes entangled in the Gang Wars of Nero City after killing one of Gabriella's agents, unknowingly sparking a deadly feud between Gabriella and Tennouren. A bloody path awaits him, one that might change him forever.

Another Bounty Hunter of Nero City, he runs into Nichol upon being mistakenly hired for the same assassination job as him and completing the task before him.

One of the many foundlings of the city, he got taken in by an elderly lady who raised him as her own son and who gave him a very strict religious upbringing. He loses his caretaker to Gabriellan Cyclone Claude and swears revenge.

Manipulated by the treacherous Lee Meilang from Tennouren who tells him his father's murderer is none other than Nichol, his thirst for revenge is now greater than ever. But will it bring him peace or will he just become just like the ones he hunts?

A Jackal pioneer and the one of the few females of her kind who survived long enough her life of violence to conceive a child.

A loving mother, she still taught her son all she knew before dying in a last fight before her son's eyes.

It's later revealed that she got fixed by Lee Meilang in exchange of her services, a position she doesn't like much but which she can't really escape since Meilang provides her with the remedy that helps her living on.

Nichol and Roxy's mentor who also assists them in their day-to-day life.

Despite being the series' voice of reason, there's not much he can do to stop Nero City and, in turn, Roxy and Nichol's fate from spiralling down to their down.

Rather courageous despite her vulnerability, the fact that so many people used her to get to him prompted Nichol to realize that a man like him would never make her happy and might indeed put her life in unnecessary danger. Doesn't stop her from still caring for Nichol no matter what.

Gabriella's leader that only appears sporadically.

He is seen giving orders to Isaac and often points out that his delusions about driving away Tennouren will likely not amount to anything. He and Isaac are long time acquaintances.

Never seen in battle but he appears to be just as manipulative as Meilang, even though he's more of a strategist than a fan of screwing with people's minds. 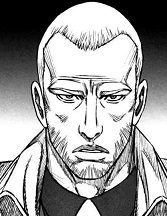 Gabriella's second in command but the one with the most direct power over the troops. A charismatic and pragmatic leader, his mere presence commands respect.

Despite his cool, stoic demeanour, he still cares a lot about his comrades and Gabriella in general. However, he's not so forgiving if someone messes up and his underlings still fear him.

He uses a straight sword in combat and uses a Shadow Walker technique that allows him to completely disappear from his opponents' perception field and temporarily blend into the dark if the setting is shadowy.

He seldom fights directly but proves more than once that he's a very competent fighter and eventually challenged Nicol to a final showdown where he eventually finds his demise.

The former head of "The Cavern", Gabriella's drug dealing section, she's quick to defect for Tennouren, since they apparently pay better.

Selfish, sociopathic and a sadist at heart, she's also a Torture Technician who derives arousal from torturing her victims. Even though she wears a typical witch hat, she doesn't seem to use any form of magic whatsoever.

Her shtick is mostly being able to cheat death since she seems to be able to cast an illusion about where her heart is. She eventually dies in her fight against Arshela since Cornelio figured out her trick.

Flying Monkey Jasper
Vampire Franco (spoilers)
The head of The Bat, the information branch of the Gabriellas. Despite appearing to be just another mobster, however, he turns out to be using both sides for his own agenda.
Ruberio
Lightning Richard
Scorpion Dosini 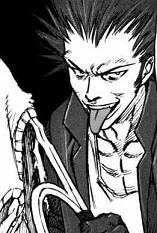 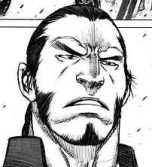