The long list of bug-themed lunatics from Arachnid who are out to ruin a schoolgirl's day.

A sniper from the Organization. She was prepared to kill Alice after she killed Kumo, but got called off by Suzumebachi.
Praying Mantis/Kamakiri

An assassin who visits Alice after she killed Kumo to either take her to the Organization or kill her.
Camel Cricket/Kamadouma 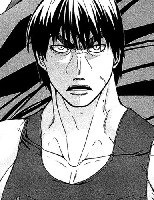 The disciplinary council head of Ouran High School. Hibiki was trained by Kumo and takes inspiration from the "Kahen Rider" tokusatsu show for his kick-focused fighting style. Has a rather twisted sense of justice and opposes Alice because she killed his master.
Army Ant/Guntaiari

The mysterious Student Council President of Ouran High School. Sara is the Organization's boss and has set up the Arachnid Hunt game for the assassins to pursue Alice. A very nasty person, she greatly abuses her subordinate Kuramoto and somehow creates a Zombie Apocalypse of mind controlling rape in the school.

A scissor wielder who ambushes Alice after she defeats Shinobu.
Digger Wasp/Anabachi

A boy who captures Oki and Yoriko to take them to Jigabachi.
Centipede/Mukade

An assassin who hides above the ceiling of the girls' bathroom waiting for Alice to appear.
Horsefly/Abu

A swordsman who is known to have been killing other organization assassins while using minimal effort.
House Centipede/Geji

A speedy organization member who challenges Oki during the Arachnid Hunt. Her socks can be stuffed with anything she finds laying around and used as powerful clubs.

Two men who wield large ant jaw-shaped gauntlets and are sent by Sara to kill Dinoponera and any allies Alice might have, such as Kabutomushi.
They fail miserably.
Spoiler Characters

As it turns out, Kuramoto is the real Army Ant Queen who has been charged with turning the Ouran High's students into zombified drones with her ability. She actually hates Alice and wants to have her humiliated, tortured and killed.

The true leader of the Organization who spends her free time as a high school student, hanging out with Alice and Oki and putting them through the wringer that is the Arachnid Hunt. A 100 years-old girl needs a thrill every now and then, you know.