The bug-themed psychos who oppose Imomushi in Caterpillar, a spinoff to Arachnid.
Currently under construction.

Imomushi's partner who gives intel for her, until she betrays Imomushi for a reward given by Ageha.
Paraponera

A former UN soldier who became a wanted man after mindlessly slaughtering american troops in the Middle East. While hiding in southeast Asia, he found an orphaned baby in Burma and raised her as his daughter. Years later, Paraponera worked under Ageha's orders to murder Imomushi, but got killed by her at some point.
Dead Leaf Moth/Murasakishachihoko

A master of disguise who is the first enemy to encounter Hanakamakiri on the ship.
Weevil/Zomushi

A machine gun-toting girl who can make people subconsciously ignore her presence.
Planthopper/Unka 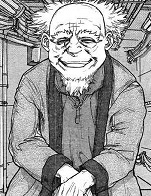 An old man with cybernetic legs who encounters Imomushi.
Former Rhinoceros Beetle/Kabutomushi
The former director of the Pomario orphanage. For his successor, see the Main Characters page.
Bark Mantis/Kinohadakamakiri 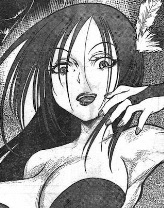 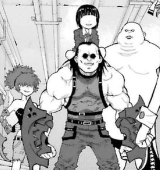 Dorcus in Himekuwagata mode (top) and her cronies.
A group of four stag beetle people who hold a nasty grudge against their former teacher Kabutomushi.

Tropes that apply for all of them:

Tropes for Himekuwagata and her sisters:

Tropes for the other three stags:

A trio of ant boys engineered from Kabutomushi's DNA who help mad doctor Jigabachi capture Imomushi.
They want to play doctor with her...
Bed Bug/Nankinmushi

A prostitute who works for the Organization. Imomushi asks her to take Hanakamakiri's virginity before they go on their mission on the Ageha cruise ship, but...
Velvet Worm/Kagimushi

The author of the Kahen Rider series who turns out to be Imomushi's master.
Leaf Beetle/Bokugehamushi

The director of an orphanage Imomushi and her sister lived in. Has become the leader of a shadowy group who's baiting Imomushi into a Carnival of Killers for their own entertainment.