The main characters from Arachnid. 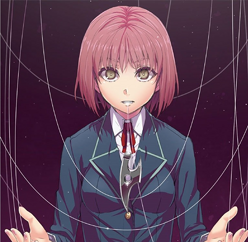 In the time it takes you to read this she'll have booby trapped your whole home with thread.
"A person who harbors ugly jealousies, lies to others, and kills... There really is no way someone like that can make friends."

A kind but deadly Ordinary High-School Student with an unusual mental disorder named Congenital Excessive Concentration that she can control to enhance her reflexes and learning skills. Alice seeks to take her family register back from the Organization and to protect herself and her friends from their assassins, even if she has to kill some people along the way. She wields a pistol that fires a knife which spreads strings around her. Both the blade and the strings are controlled by hand gestures and sound commands with perfect precision thanks to her brain condition.

After surviving the Arachnid Hunt and hiding out for a month, Alice spends some time aimlessly fighting the zombie outbreak provoked by the Army Ant Queen's death. She is found by Hanakamakiri, who is following orders to let Alice into the Organization as their new boss...
Yoriko Tajima

A student who bullied Alice until she turned out to be more dangerous than expected, but then gradually became nicer after letting Alice live with her, even if initially it's just for the sake of protecting herself from the Organization.
Cockroach/Gokiburi

A quiet student from Alice's class who turns out to be a sadomasochistic lesbian girl and a member of the Organization. Gokiburi is sent by Hibiki to kill Alice but tries to enslave her instead. After being defeated, she's taken home by Alice and becomes devoted to her. Oki has various abilities related to cockroaches, from their high speed, strength and durability to how they can react to sudden shifts in air current and become slippery by sweating lots of oil.

She has been trained by Kabutomushi, who in Caterpillar tasks her with assassinating Imomushi in order to graduate from the assassin training institute Pomario. After Arachnid, Goki is focused on finding Alice who has been finally caught by the Organization.