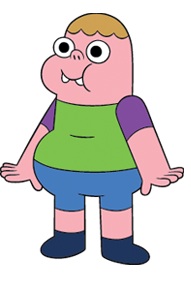 The titular, happy-go-lucky main character of the series.

One of Clarence's best friends. He is very uptight.

Clarence's best friend. A bald, raspy-voiced kid who lives in a trailer with his large family.