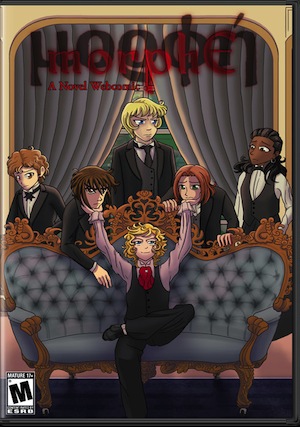 Of course they're here willingly.
"Oh, don't worry, my new little Sprout. His frail mind can't handle all the wonderful things coming out of yours. He would be left to wallow in some madhouse, or to wander the streets. Really, this is so much kinder."

was a horror webcomic set in the New World of Darkness universe with a distinctly Visual Novel style. After their rescue from a madwoman's hellish subterranean caverns, five humans have their eyes opened to the dark truth lurking under normal society. A "benefactor" takes them in, but he’s a cold-blooded killer with a deadly fixation on the new mages. In a world of magic, vampires, werewolves, ghosts and far creepier creatures, can he be trusted? Can anyone?

morphE was updated in Flash and features some interactive elements such as point and click pages and adventure game inspired updates. The creators have a slew of Bonus Material on the official Tumblr Page

which includes some backstory, animations and information that is not evident in the comic itself. The story originated as a tabletop game played between the four creators and is being rewritten for brevity and to create a better flow for the story.

The comic was discontinued in October 2017.