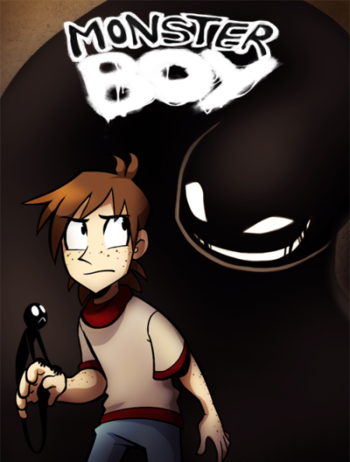 "There's no such thing as monsters..."

“Monster Boy” is an animation project currently in the works at Bournemouth University. It is based in a world where humans carry invisible “monsters”. These creatures are always attached to their bodies in some way, and represent all that is negative about that person’s personality. Their forms are impressioned by aspects of their host, but exist in a plane entirely separate to reality. They cannot affect the real world, nor can they be seen or heard.

The main character, however, breaks this mould when he first becomes aware of his monster, the self-titled Vex, at age 13. At first, the boy can only hear his voice, but Vex is quick to reveal himself, and the idea of monsters, to him.

The boy discovers that, indeed, he is not alone. Everyone he meets has a monster of their own design, yet are completely unaware of them: his teachers, the school children, even his own parents.

As Vex will explain to the boy in due time, these monsters seem to appear to humans in times of turmoil, and represent their current situation. For example, Chris is suffering greatly from an inferiority complex and artistic frustration, of which Nexus is quick to remind him.

The story explores the lives of the three main characters, their lives, and their monsters; it addresses topics such as bullying, loneliness, social awkwardness, loss of loved ones, etc.

Monster Boy was created by Rebekka Hearl. Once she graduates, she hopes to pitch this idea and the work to an animation company, in hopes of having it produced as a computer animated feature film. Currently, she is uploading the pre-production work to her DeviantArt, YouTube, and Tumblr. Proper production of a 3-5 minute computer animated scene is expected to commence in the fall.

A link to the author's deviantART is here

and a link to the debut animatic is here

. It officially debuted on the site on Halloween 2012.