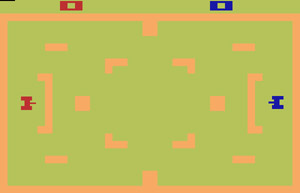 Combat was one of the Atari 2600's launch titles, and it came with the console from 1977 to 1982. It was a series of 27 Top-Down View or Side View, Player Versus Player, Shoot Em Ups. It was based on two arcade games from the mid-1970s: Tank and Jet Fighter.

Each game lasts 2 minutes and 16 seconds, and the object is to hit your opponent more than he hits you.

The difficulty switches are used to handicap the games, shortening the tank shell range or slowing the airplane.

Atari developed a sequel game Combat II intended for release in the early 1980s, but it was shelved and didn't see a release until the early 2000s. It features only tank combat. An Atari 5200 homebrew sequel was released, featuring up to four-player gameplay.