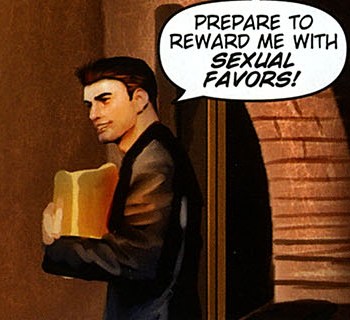 Pure distilled awesomeness fueled by rage driven misanthropy and a love of science.

From Texas and an engineering graduate with an interest in nuclear, aerospace, and robotics, Mecha are still a Guilty Pleasure for me. Generally fun kind of dude with a slight dark humor streak (and by slight I mean several miles wide) and decent knowledge of most scientific fields (or so I like to think). Destruction of the Earth may or may not be his lifetime goal. A firm believer that most politicians, lawyers, reporters and mimes need to be CLEANSED WITH THE PURIFYING FLAME. He does, however, suffer from major attraction to large, busty redheads that know how to fight.

My personal preferences vary from medium to medium but tend to stay within the Science Fiction, Fantasy, Action, and Comedy genres.

Overall, not a fan of True Art. I simply view artworks as fun hobbies, rather than important, as many others seem to treat it. I have no respect for classics of any kind and consider status as such as points against the work due to continuous exposure to such "pinnacles of perfection" being incredibly boring. I view a works good/bad rating as synonymous with entertaining/boring. I have a truly intense hatred for Shakespeare.

I am curating a number of pages and try to help others edit better. I am very active in both TRS and Image Pickin' and helped set up some of the standard practices there. I, unfortunately, do not remember to stop by Ask The Tropers, YKTTW, Lost and Found, or You Know That Show as often as I should.

If anyone wants to add stuff, have at it.

"Politicians... reporters and mimes need to be cleansed with fire." This is Parable News reporting that if Deboss has his way I am soooo dead.

Just thought I should let you know...whenever now is, I am, in fact, eating a box of all-red Starbursts. Yes, right now, as you're reading this. ~deathjavu

NOT THE MIMES!!! Anything but the mimes! D= -Spooky Mask

Deboss provides an example of:

Deboss was mentioned in this blog

, which took issue with his stance on literature.

Your avatar being an ass makes sense in more ways than one. -Daionus the 23rd

Until I read this page, I thought that your avatar was from Bayonetta. Now I know the truth... - BrightBlueInk

There is NO way that your avatar is a guy. No way. Not even the most overboard stereotypically feminine Bishonens I have ever seen have an ass like that. Have I Mentioned I Am Heterosexual Today?? ...I'm confused now. Darkclaw