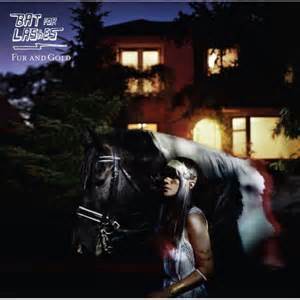 ''We walked on and on / but I didn't feel his touch / the desire I once tried to hide / that tingling inside / was gone"
Advertisement:

Fur and Gold is the debut album by Bat for Lashes, released in 2006. It was released to critical acclaim, and is definitely a case of First Installment Wins.

It's a dark and atmospheric record, and is inspired by genres like Folk Music, Electronic Music, and Psychedelic Rock. It also has a sort of fairy tale, fantasy theme to it, and is the start of her "mystical" sound. The singles from the album are "The Wizard", "Trophy", "Prescilla", and "What's a Girl to Do?", which was the album's biggest hit.

US and iTunes bonus track:

What's a trope to do?