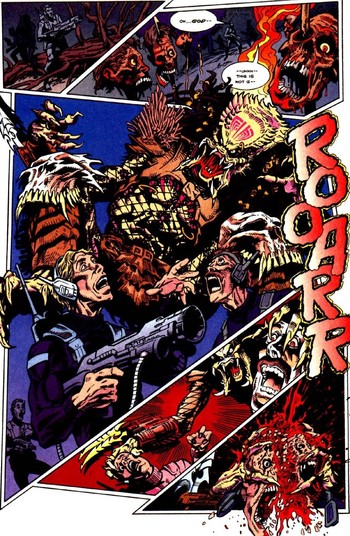 "But unlike others of its species, [the Bad Blood Predator] is no sport hunter, but a crazed psychotic, a butcher of its own kind, an unhinged killing machine."
"Lieutenant Ripley's death: a selfish act. The destruction of the Legato at the hands of some angry little girl: inconvenient. But let us be frank, Corporal—and please, believe me when I say this—there is nothing sacred here. Every resource I have is expendable when it comes to ensuring the further study and development of this organism."
—Michael Bishop, Aliens: Colonial Marines (Stasis Interrupted DLC)
Advertisement:

Alien vs. Predator shows that Xenomorphs and Yautja aren't the only monsters to worry about.

Entries for each franchise are by approximate release/publication date.