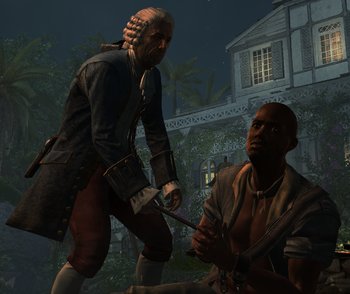 Marquis de Fayet branding a slave.
"...He killed and killed. Enemy or ally. Civilian or soldier. Guilty or innocent. It mattered not... If he perceived one to be an obstacle, they died. He maintained that violence was a more efficient solution. It became his mantra... and it broke my heart."
—Haytham Kenway, lamenting on the cruelty of Edward Braddock, Assassin's Creed III
Advertisement:

The Assassin's Creed franchise is well known for its complex morality, with its struggle of Assassin vs. Templar, but several villains have managed to show they are nothing but monsters