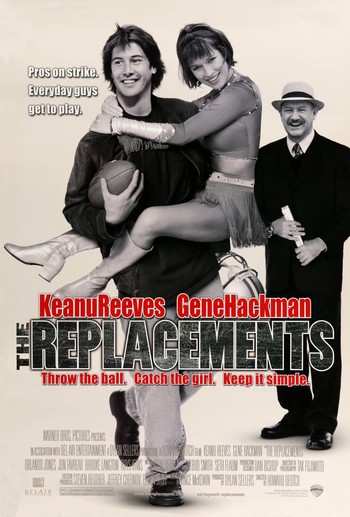 A not-so-typical football movie made in 2000, directed by Howard Deutch and starring Keanu Reeves and Gene Hackman.

A rag-tag group of semi-pro and amateur football players are collected by an esoteric former coach for one last shot at the big time. Thanks to a football strike by dozens of pro players, and in some cases (notably Washington, the team of focus in the movie) entire teams, replacements are hired to keep the team's standings intact 'till the end of the season... they turn out to be even more awesome than the actual team they're replacing.

Not to be confused with the Disney Channel animated series of the same name.

Summerall: We're looking at a different [Washington] team here in the second half.
Madden: Absolutely. Washington is playing like there's no tomorrow... because there isn't.
That's why girls don't play the game.