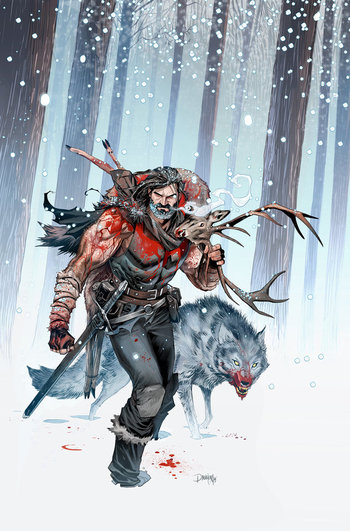 Santa Claus: Year One
Once upon a time. And a place. There was a man. These days everyone knows his name. But few could tell you who he really is or how he got started. This is the greatest untold story of them all.
Advertisement:

Once upon a time, there was a jolly old man dressed in red with a belly full of jelly who delivered presents to all the good children of the world on his magical sleigh pulled by eight (nine if you included whatsisname) reindeer. His name was Santa Claus. Over the years since fiction existed, the big guy got tons of proposed origin stories detailing how he came to be.

Then Grant Morrison decided that they wanted to take a shot at the idea and wrote Klaus, a seven-issue miniseries telling us how they believe Santa came into existence while also cranking the Badass Santa trope as high as it can possibly go. Dan Mora of Mighty Morphin' Power Rangers (Boom! Studios) fame provides artwork.

The series follows a man named Klaus, a former captain of the guard for the once happy town of Grimsvig. Klaus was framed for the murder of the town's Baron but managed to survive his exile thanks to a wolf he names Lilli. Returning to Grimsvig after several years, Klaus finds the town to have become quite the Crapsack World, to the point where even making a wish at a well is forbidden. The day after his anonymous return to Grimsvig, Klaus finds a sack of toys left for him by supernatural beings called the "Shining Family". Unsure of what to do at first, he soon takes it upon himself to cheer the children of Grimsvig up by delivering toys to them in secret. Klaus soon becomes dubbed the "Santa" by the folks in the village, much to the irritation of its leader, Lord Magnus. Thus, the Santa becomes a wanted man in Grimsvig. But as the series progresses, it becomes clear that there is something more that is happening within Grimsvig besides the conflict between the Santa and the village's oppressive leadership. Something is within the rocks of the town's mines, and it wants out...

The series was followed by:

Not to be confused with the videogame of the same name, nor the 2019 animated movie, though the latter is another origin story for Santa Claus.