A list of Accel World characters primarily associated with the monstrous Chrome Disaster.

open/close all folders
The Armor of Catastrophe

The Armor of Catastrophe

Before it all went horribly wrong
A glitched item properly known as "The Disaster", which takes over Burst Linkers and corrupts them into an entity called Chrome Disaster.

The armor is eventually revealed to be a warped fusion of "The Destiny" of the Seven Arcs (an Armor of Invincibility intended as a reward for those who penetrated the defences of the Imperial Palace) and "Star Caster" (a high-level sword item), bound together by the hatred of a deceased Burst Linker named Chrome Falcon.

The star-crossed lovers
Voiced by: Emiri Katou (Japanese)
An Originator in Brain Burst, Chrome Falcon is the first Chrome Disaster, responsible for creating the Disaster Armor after his partner and lover had Brain Burst permanently uninstalled.
Saffron Blossom

Voiced by: Ryoko Ono (Japanese)
An Originator who invited eleven Children into Brain Burst, all of whom received avatars themed after flowers. She was also the partner and lover of Chrome Falcon. When he became Chrome Disaster, her mind was trapped in its sword, unable to communicate with him.
Chrome Disaster II (Magnesium Drake)

A former rising star in the duelling circuit, who participated in the hunting of the original Chrome Disaster only to be taken over by his armour.

A Master Swordsman and one of Saffron Blossom’s eleven Children. After Drake was slain she became infected by a shard of the Armour, and hesitated too long in destroying it until she was taken over. She was eventually delivered a Mercy Kill by Blue Knight.
Chrome Disaster IV ("Devourer") 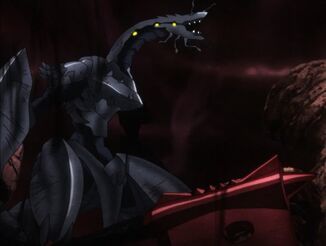 A Burst Linker who was defeated by an alliance of the Kings of Pure Color. After suffering total point loss, their armor was secretly retrieved by Yellow Radio.
Chrome Disaster V (Cherry Rook) 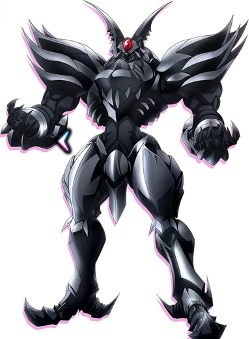 The "Parent" of Scarlet Rain, the second Red King. Once it became clear that he couldn't catch up with Yuniko, he sank into despair and resorted to using the Disaster Armor to gain more power. 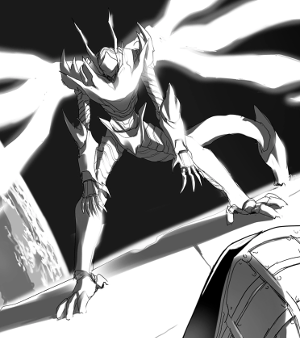 "But the reason stainless steel doesn't rust... is because it contains chrome."
See the Nega Nebulus section for more details