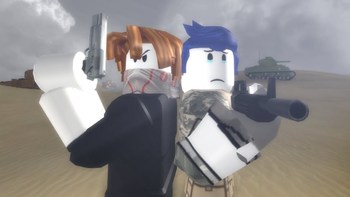 Be strong. Always be strong.
The Last Guest is a Roblox Fan Animated Drama short film and first of its series of the same name, created by ObliviousHD, a British teenage animator renown for Roblox fan animation and Machinima, and released on December 8, 2017. Despite being young, it has over 20 million views and is considered one of the best Roblox fan animations ever made.
Advertisement:

Produced as a tragic and heartbreaking Allegory of Roblox's removal of the Guest feature, it tells the life of Guestnote Originally, he had No Name Given, but the subtitles and other characters in the later entries call him Guest, whose status as Guest is the reason he is disliked by others, and worst, is hunted down by Bacon Soldier Terrorist Organization, an army of terrorist Guest-hating noobs. After witnessing the horrific deeds of the Bacon Soldiers and the nearly-successful genocide against Guests, he joins the army and tries to defeat them for once and for all.

The Last Guest 2 - The Prodigy, released on April 7, 2018, is a Synchronous Episode taking place during the events of The Last Guest in the eyes of Jez, a Bacon Soldier taught that Guests were evil. However, after observing the horrible life the Guests were enduring and befriending Zara, who cares for the Guests, he takes a great turn on his view... Watch it here.

The Last Guest 3 - The Uprising was released on September 28, 2018. As another Synchronous Episode happening during the end of The Last Guest, it deals with the Colonel taking over the remains of the Bacon Soldier Terrorist Organization, and a plan to free the Guests once again. Watch it here

The Last Guest 4 - The Great War, the Grand Finale of and direct Sequel to the series, was released on November 29, 2018 and can be seen here

. The ties are loose, the Robloxian Army is going head-on with the Bacon Soldier Terrorist Organization once again, and the fate of them and the Guests is uncertain.

An official Roblox game based on The Last Guest series, Guest World was released for everyone on December 22, 2018. There, players can roleplay as either a Guest or Bacon, socialize, and take on quests and minigames. Check it out.

If you would like, you can buy and watch the entire combined (and extended) series on Amazon Prime Video

On May 11, 2020, the trailer for the prequel series, The Bacon Hair, was released, which serves as the Prequel of The Last Guest series and explores the state of the Bacons and Guests back then. All parts were released on December 11, 2020, with the first part made free on YouTube and the rest having to be bought on Amazon Prime Video.