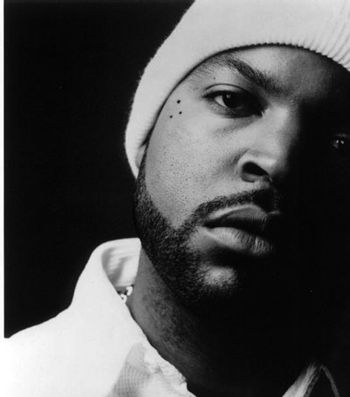 O'Shea Jackson (born June 15, 1969), better known by his gang name Ice Cube, is an American rapper, actor, screenwriter, and producer. He began his career as a member of the rap group N.W.A along with group leader Eazy-E, and later built a successful solo career in music and cinema. From the mid-1990s onwards, Jackson focused on acting, and his musical output has slowed down considerably. He remains one of the most visible West Coast rappers, having helped originate Gangsta Rap. On the other hand, he has started starring in children's movies, leading to a severe case of Rated G for Gangsta.

Ice Cube was born in South Central Los Angeles, California, the son of Doris Jackson (née Benjamin), a hospital clerk and custodian, and Hosea Jackson, who worked as a groundskeeper at UCLA. His cousins are Teren Delvon Jones, also known as Del tha Funkee Homosapien, of Deltron 3030, Gorillaz and Hieroglyphics, and Kam of rap group The Warzone. At age sixteen, Ice Cube developed an interest in hip hop music, and began writing raps in Taft High School's keyboarding class. He attended the Phoenix Institute of Technology in the fall of 1987, and studied Architectural Drafting. With friend Sir Jinx, Cube formed the C.I.A., and they performed at parties hosted by Dr. Dre.

In 1987 Cube and Dr. Dre released the EP My Posse, under the alias CIA. After the collaboration, Cube showed Eazy-E the lyrics to "Boyz-n-the-Hood". Eazy-E, although initially rejecting the lyrics, eventually recorded the song for N.W.A. and the Posse, the debut album for the group N.W.A (short for Niggaz Wit Attitudes) that included him, Cube, Dre, and other rappers MC Ren and DJ Yella.

By this point Cube was a full-time member of N.W.A along with Dr. Dre and (to a lesser extent) MC Ren. Cube wrote Dr. Dre and Eazy-E's rhymes for the group's landmark album, Straight Outta Compton, released in 1988. However, as 1990 approached, Cube found himself at odds with the group's manager, Jerry Heller, after Heller responded to the group's financial questions by drafting up a new arrangement. As he explains in his book, since Cube wrote the lyrics to approximately half of both Straight Outta Compton, and Eazy-E's solo album, Eazy-Duz-It, Cube was advised of the amounts he was truly owed by Heller, and proceeded to take legal action, soon after leaving the group and the label. In response, the remaining N.W.A members attacked Cube on the EP 100 Miles and Runnin, as well as their next and final album, Efil4zaggin ("Niggaz4life" spelled backwards).

Cube recorded his debut solo album in Los Angeles with the Bomb Squad (Public Enemy's production team). AmeriKKKa's Most Wanted was released in 1990 and was an instant hit, riding and contributing to the rising tide of rap's popularity in mainstream society. The album was charged with controversy, and Cube was accused of misogyny, and racism. Subsequently, Cube appointed the female rapper Yo-Yo (who appeared on AmeriKKKa's Most Wanted) to the head of his own record label and helped produce her debut album, Make Way for the Motherlode. This was followed by a critically acclaimed role as Doughboy in John Singleton's hood-based drama, Boyz n the Hood. In the same year as AmeriKKKa's Most Wanted, Cube released the acclaimed EP, Kill At Will. Kill At Will sold well, becoming the first hip hop EP to go both Gold and Platinum.

His 1991 follow-up, Death Certificate, was regarded as more focused, yet even more controversial, and critics accused him again of being anti-white, misogynistic and antisemitic. It even prompted Billboard magazine to publish an editorial criticizing the album's lyrical content. Death Certificate is thematically divided into the "Death Side" ("a vision of where we are today") and the "Life Side" ("a vision of where we need to go"). It features "No Vaseline," a scathing response to N.W.A's attacks and "Black Korea," seen as a response to the death of Latasha Harlins

, a 15-year-old African American girl who had been shot by a Korean store owner on March 16, 1991 because the owner thought Harlins was trying to steal a bottle of orange juice. Considering that the release of the track preceded the Los Angeles Riots, in which many of the people targeted were of Korean descent, Ice Cube was accused of inciting racism by some groups.

Cube released The Predator in November 1992, which had been recorded amidst the LA uprising of 1992. Referring specifically to the riots, in the first single, "Wicked", Cube rapped "April 29 was power to the people and we might just see a sequel". The Predator debuted at number one on both the Billboard pop and R&B charts, the first album in history to do so. Singles from The Predator included "It Was a Good Day" and the "Check Yo Self" remix, and the songs had a two part music video. The album remains Cube's most successful release, with over three million copies sold in the US. Lethal Injection was released in the end of 1993 and represented Cube's first attempt at imitating the G-Funk sound of Dr. Dre's The Chronic. It was not well received by critics, but was loved by rap audiences. Either way he had more successful hits from Lethal Injection, including "Really Doe", "Bop Gun (One Nation)", "You Know How We Do It" & "What Can I Do?". After 1994, he took a hiatus from music and concentrated on film work and developing the careers of other rap musicians, such as Mack 10 and Mr. Short Khop.

In 1995, Ice Cube had reunited with former N.W.A member Dr. Dre, who was now part of Death Row Records, in their duet "Natural Born Killaz". After a stint with W.C. and Mack 10 in the rap supergroup Westside Connection, Cube focused on a solo project that would consist of two related albums released separately. In 1998, the first part, War & Peace Volume 1: The War Album, was released. The second part, War & Peace Volume 2: The Peace Album, was delayed a bit but finally released in early 2000. The albums featured appearances from Westside Connection, Krayzie Bone (who was on the hit lead single "Until We Rich") as well as a reunion with fellow N.W.A members, Dr. Dre and MC Ren. In 2000, Cube also joined Dr. Dre, Eminem and Snoop Dogg on the Up In Smoke Tour. In 2006, Ice Cube released his seventh solo album, Laugh Now, Cry Later. Afterward Ice Cube made Raw Footage in 2008 (featuring the singles "Gangsta Rap Made Me Do It" and "Do Ya Thang") and I Am The West in 2010. Finally, after focusing much of his power on movies, including appearances in 21 and 22 Jump Street, he released his latest album, Everythangs Corrupt, in 2018 to celebrate the 25th anniversary of Death Certificate.

His eldest son, O'Shea Jr., is also a rising emcee and actor in his own right, and portrayed his father in the 2015 biopic Straight Outta Compton.

Not to be confused with Ice-T, a fellow rapper from Los Angeles. See here