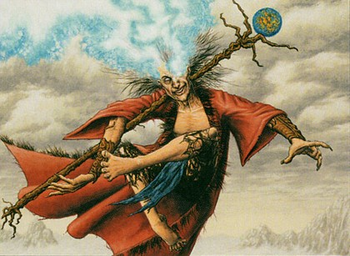 My head is a cloud, your argument is invalid!
EPA Official: Sir, I'm afraid you've gone mad with power.
Russ Cargill: Of course I have! You ever tried going mad without power? It's boring! No one listens to you!
— The Simpsons Movie
Advertisement:

Cast from Sanity is the gameplay form of this trope: apparently "Sanity" has a gauge/number and is some kind of resource/payment to do a skill, i.e you lose your sanity the more you use it.

This is the inverse of Power Born of Madness. God-like powers often give someone a god complex and thus this trope. One possible way to stave this off is to think "A God I Am Not." It always occurs when someone makes serious use of an Artifact of Doom, provided the user isn't eaten on the spot by said artifact.

Not to be confused with With Great Power Comes Great Responsibility. Compare The Corruption, Almighty Idiot, Drunk with Power, Power High, God for a Day, Mad God.