Literature / Up in the Air 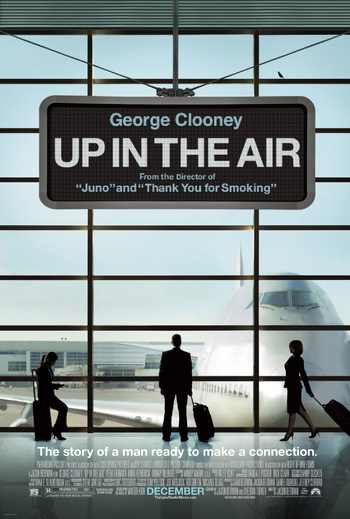 "Make no mistake, moving is living. Some animals were meant to carry each other, to live symbiotically over a lifetime. Star-Crossed Lovers, monogamous swans. We are not swans. We are sharks."
— Ryan Bingham
Advertisement:

Up in the Air is a 2001 novel by Walter Kirn, which later became a 2009 film directed and co-written by Jason Reitman and starring George Clooney, Vera Farmiga and Anna Kendrick who all received Oscar nominations.

Ryan Bingham (played by George Clooney in the film) is a motivational speaker and Career Transition Counselor whose job takes him all over the country to lay off corporate workers. He has no concern for his "clients" whose careers he "transitions" into unemployment, and his primary ambition in life seems to be to become the seventh person ever to accumulate ten million frequent flier miles. Everything changes when two new women enter his life: Alex Goran (Vera Farmiga), an attractive businesswoman living a life seemingly identical to his, and Natalie Keener (Anna Kendrick), a freshly graduated new employee who introduces a new tool for employee axing: video conference calls. Ryan's boss agrees with Natalie that this is the way of the future: no more traveling counselors, no more plane tickets, no more time wasted traveling to and from and inside airports. For Ryan, who lives out of his carry on luggage and spends more than three hundred days of the year on the road, this represents a threat to his entire way of life.

But maybe his entire way of life was meant to change. His youngest sister is getting married. He's growing closer to Alex (on a romantic level) and to Natalie (on a more paternal level), and he begins to reevaluate his place in the world.

The novel is written as a conversation between Ryan and a seatmate — the reader — aboard a flight. His life on the road and his relationship with his family is covered in more depth, and the aspect of the character as a Career Transition Counselor is downplayed in favor of his status as a would-be novelist and a semi-successful business coach. The quest to reach a million frequent flier miles is more central in the novel than in The Film of the Book. The entire plot takes place over a few days, while his resignation letter is sitting on his boss' desk. He is also apparently being headhunted for a job with MythTech, a mysterious business operating out of Omaha, Nebraska.

Alternative Title(s): Up In The Air