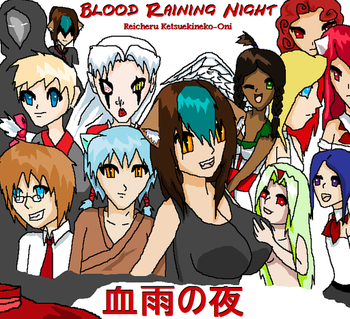 Nya~on!
Reicheru Ketsuekineko-oni is a 17 year old caat-demon girl who is torturched by the memory of her father. She works for the Yakuza with her dog-cat-demon friend Inuyasha. She loves denmark but her love is put into peril. Will she save her relationship and destory her father? FIND OUT!
-Reicheru's summary of Blood Raining Night on her fanfiction.net account.

Blood Raining Night is a crossover/self-insert fanfiction with Hetalia: Axis Powers, Inuyasha, Elfen Lied, The Legend of Korra, Dragon Ball Z, Fullmetal Alchemist, Hell Sing, Black Butler and much more! The story revolves around Reicheru Ketsuekineko-oni, a vampire cat demon who killed her mother when she was a baby, was abandoned by her father, and works for the Yakuza. She also is dating Denmark, has Inuyasha as her trainer, a half sister who is half angel named Yuki, and is So Beautiful, It's a Curse. It all goes downhill from there...

On July 20, 2012, Reicheru released the Fanime for Blood Raining Night on to YouTube with most viewers thinking it to be a Troll Fanime. There is still debate if Blood Raining Night is a Troll Fic or not. Over time, the art for the fanime has improved, the writer's spelling has gotten better, and she has been listening to people's recommendations of what not to do.

. Episode 7 has been deleted from YouTube because of a very disturbing sex scene. The author has a DeviantArt here.

Be warned, this fanfiction does get NSFW, but it can be found here.

Tropes that Blood Raining Night provides an example of: