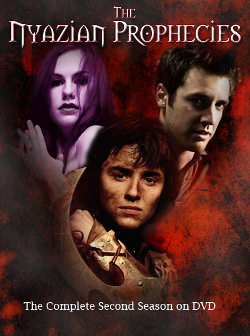 Andrew: You're a Boyslayer. The Boyslayer.
Connor: Boyslayer? Dude, you have got to be kidding.
— 1x01 "Resurrection"

is a virtual series spinoff of Buffy the Vampire Slayer and Angel written by Emcee. The series takes place after Angel and follows Connor as he becomes a Slayer (of sorts) with the help of his Watcher, Andrew.

The series consists of two seasons and a crossover movie. A movie trilogy was planned for the series' conclusion, but Schedule Slip set in. Emcee eventually posted a summary of how the series was supposed to end

in order to wrap things up.

The series was revived in 2020 as The Nyazian Prophecies: Revamped

, with the old episodes being rewritten and reposted. Emcee revealed on Tumblr

the rewritten stories will be followed by the originally intended trilogy of movies and a sequel series, set in present day.