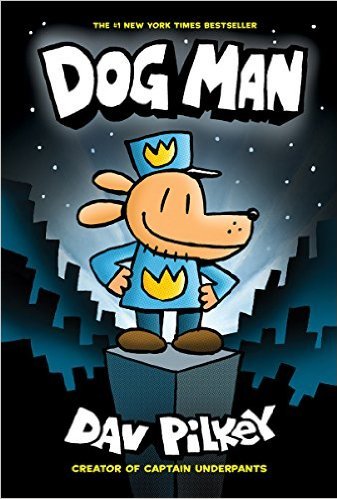 Dog Man is a series of "Graphic Novellas" created by Dav Pilkey, creator of Captain Underpants (and in-universe, by George and Harold, who are now in sixth grade as of Fetch-22). The backstory goes like this: There are two cops. There is Officer Knight and Greg the Dog. However, one day, Petey the Cat plants a bomb, and the heroes have to defuse it. However, they cut the wrong wire and the bomb explodes. As Greg's body and Knight's head respectively are dying, doctors sew Greg's head onto Knight's body. And thus, a new crime-fighting hero is born!

The book series has been adapted into a musical in 2019 based on the first 3 Dog Man Books (mostly from A Tale of Two Kitties). Li'l Petey also gets his own spinoff book series, Cat Kid Comic Club, released in December 2020.