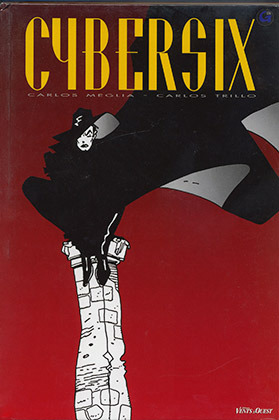 Cybersix is an Argentinian/Italian Comic Book written by Carlos Trillo and drawn by Carlos Meglia, first published as weekly installments in 1991 for Skorpio, an Italian comic magazine. In addition to the original 113-installment run, it later got spun off into a 45-volume series of books. The series has also been translated into French (separated into 12 volumes) and Spanish (6 volumes in 1993). Unfortunately, an English version never saw the light of day, but a wonderfully adapted 13-episode animation done between Japan and Canada did.

The story centers around Cybersix, the sixth of five-thousand artificial humans in the "Cyber" series created by Dr von Reichter. Von Reichter destroyed 4999 Cybers due to their tendency towards disobedience and doesn't intend to let his last one get away. Cybersix hides in Meridiana city, hunting her creator's other monsters in order to survive and trying to blend into society under the alias Adrian Seidelman, a male school teacher.

The original graphic novels are all quite rare to find in print, though ebooks of the Spanish and French versions are available from EBOOKEE.

An English fan-translation of the French

is available as well, though it was worked on by two different translators.

Besides of the animated series, there was also a short-lived live-action series made in Argentina made in 1995.