Characters / The Review Team Other Villains Season One To Three

Just as there are many heroic or normal characters, we've got a slew of bad guys to cover. 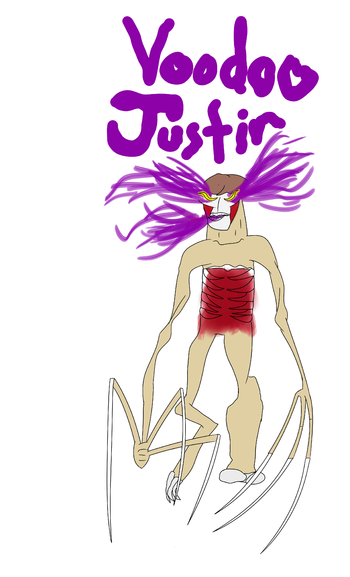 When celebrity bashing gets taken to the next level.

A creature created by crazed Beliebers that goes on a short-lived rampage until it's killed by Finn.

An evil man who sold his soul to Lucifer, Count Dracula was the first to create the Vampire race. Things got so bad that resident Van Helsing and plenty of others tried to stop his plans to exterminate humanity. The rebellion worked and Dracula was sealed away in a coffin by the use of magic weapons. He was later freed by the Great Evil, but now he's stuck in a Kinclocloptian body. He now searches for followers to restore his greatness.

A poor sap that tried to go up against Dracula, but ended up as the first Werewolf. Not only that, but he ended up loyal to him and the 'Great Evil' as they call it. He tried to turn the whole populace into those like him to serve Dracula, but his own friends had to lock him up to prevent him from doing so. Many years later, The Great Evil freed him, but he was stopped by Finn and Basil. To make a long story short, he, his machine, and a giant pillbug were sent off a cliff. However, he's only mostly dead...

The only thing known about this creature is that it's responsible for cutting corners in film, lost footage, and serving The Great Evil. Vicious and determined in nature, he has targeted the Review Team with extreme prejudice. Godzilla was the first to fight him and since then, he hasn't given up trying to kill every member he sees.

Titan and his Minions

Titan and his Minions

Sigh. YES. The same guys (Titan, Mysterious, Rep-Stallion, and Dementia) from 'Starfleet Magic', the infamous series by Dakari King Mykan. Here, not only are they alive, but they have to work under the thumb of Necrosan in his insane revenge scheme. However, that doesn't mean they're happy about it. Fate has a few surprises for them, though.