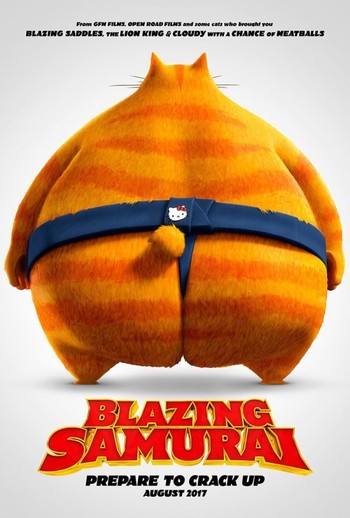 Prepare to crack up.
Advertisement:

Blazing Samurai is an upcoming CGI animated film directed by Chris Bailey and is set to be distributed by Open Road Films.

The film is intended to be a homage to Mel Brooks' 1974 Western Comedy film Blazing Saddles. Hank (Michael Cera), a dog who wishes to become a samurai, stumbles upon a strange land known as Kakamucho, which is inhabited entirely by cats. He comes across Ika Chu (Ricky Gervais), an evil warlord who helps Hank become a samurai by placing him under the care of Jimbo (Samuel L. Jackson), who was once a great samurai himself. Jimbo reluctantly agrees to train him, and eventually, Hank must save Kakamucho from Ika Chu in order to discover what it means to become a true samurai.

The film was first launched as a Facebook crowdsource by Mass Animation, which dubbed it as the first ever theatrically animated film to be created from a crowdsource.