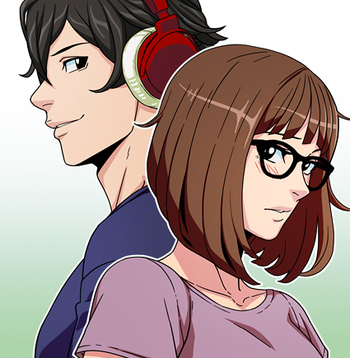 The story unfolds as Marshall and Sam both learn more about each other and each struggle with their own personal issues. It also soon involves the personal issues of their various friends and family as well. The world and story is heavily inspired by both manga and video games featuring shout outs to both. Despite an overall humorous tone, and a healthy sprinkling of Fourth Wall Breaks the story still touches on serious issues such as mental illness, abuse, infidelity, and death, among other things, and takes time to delve into the backstory and mental state of Sam, Marshall and also the various supporting characters taking time to develop the entire cast.

Webtoon launched an Animated Adaptation of the comic's first chapter in September of 2019, which can be found right here