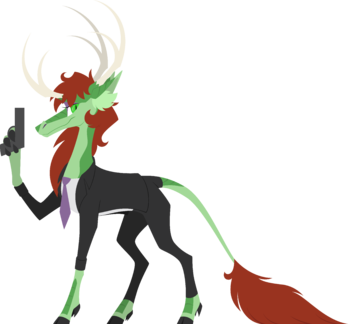 Agent [CONFIDENTIAL] Kirin.
Hi, I'm Agent Kirin, and I'm an artist who prefers to remain anonymous. I specialize in creature design - lots of Fakemon at the moment, but I'm trying to push myself to do more original content as well. My humans could use some work, though.
Advertisement:

I can be found on DeviantART

under the same username I use here.* I also have a Twitch

account with a variant of the username, although I'm not currently streaming there. Where'd the username come from? I'd Tell You, but Then I'd Have to Kill You... Okay, here you go.

General info about me
A few of my favorite works
If I try to list all the works I like, I'm inevitably going to forget something, so I'll just list the ones I'm most into.
Video Games:

Shows: (I've got some serious catching-up to do on some of these...)

A few of my favorite tropes
Advertisement:
Tropes that apply to me
Things I've launched
Tropes:

Agent [CONFIDENTIAL] Kirin (or simply Confidential) is my internet persona, shown in the page image. She's a secret agent.
Works that I'm working on
Those curious can find the trope lists for these in my sandbox.