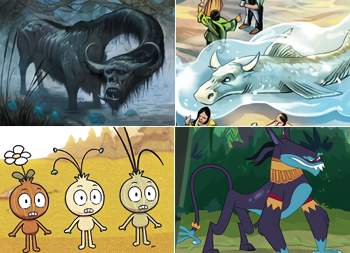 L - R, top to bottom: catopblepas (Greek), ophiotaurus (Greek), vittra (Swedish), ahuizotl (Aztec)
Some mythical creatures are well known enough to be recognized instantly. Cerberus the three-headed canine, the fish-tailed mermaids, and the fearsome dragon. Then there are those that one must assume were made up due to not being well known, such as the Nokk of Scandinavian folklore, the Cipactli of Aztec myth, and even a close sibling of the more well-known Cerberus, Orthrus.
Advertisement:

This also applies to other kinds of made-up creatures, such as cryptids (Ever heard of the New Jersey Mantis Man?), or depictions of famous creatures that are either more accurate (such as a siren being depicted as a half-bird woman rather than being an alternative name for mermaid, which most people would call harpies), or borrow from a different depiction than popular culture (there is some Greek art of a two-headed Cerberus, and a hermaphroditic hag called as a Lamia, a name more used for Snake People these days, and werewolves turning into vampires when dying).

Similar to its sister trope Seldom-Seen Species, it's a Cyclic Trope by nature, though possibly not quite to the same extent.

Examples of this trope should be creatures of myth or folklore that are still seldom seen in media these days, or at least the depiction shown. Examples of older works that show these creatures or depictions that were rare in media at the time of the work's release but not that obscure now are also allowed. Gods and mythical figures can also count under this trope.

If a creature of folklore or mythology is given the name of another creature without any basis from the original source, then it's Call a Pegasus a "Hippogriff". Often an example of Shown Their Work and/or Aluminum Christmas Trees. It should be pointed out that some creatures are more known some to others, such as the Nokk being well-known in Norway but pretty much is unknown in the rest of the world, but it should be pointed out the same applies to Seldom-Seen Species, possibly even more since that trope has a less likely chance to suffer Call a Pegasus a "Hippogriff", or Call a Rabbit a "Smeerp" in this case.

Mi'raj (معراج), also known as al-mi'raj,note "Al" means "the" and isn't actually part of the name. Also, other romanizations of "معراج" are possible. horn rabbit, needle rabbit, and bunnicorn, is a creature that resembles a rabbit with a horn on their head. The default mythological depiction is a yellow hare with a single, foot-long, black, and twisted horn comparable in silhouette to that of a unicorn, while the modern fantasy look favors an all-white rabbit with a smaller horn that is white or a similar unobtrusive color. "Mi'rāj" means "ladder" in Arabic, but has religious connotations that favor "ascension" as translation. It is unknown why the mi'raj has this name.

As far as surviving documentation goes, the mi'raj has its origin in a myth regarding Alexander the Great, as written down in Aja'ib al-Makhluqat wa Ghara'ib al-Mawjudat. Once, he visited Jazirat al-Tinnin, an island in the Indian Ocean, and was asked by the population to kill the tinnin that was terrorizing them. He did and among his rewards from the grateful people was a mi'raj, a horned hare. The intent of the reward is unclear, because the creature terrifies other animals away on sight. This is a trait shared with the karkadann, a one-horned creature described in both older and more works. As such, the mi'raj is theorized to be mythologically derived from the karkadann. The immediate real-world inspiration most likely were rabbits infected with the Shope papilloma virus, which typically prompts the growth of keratinous carcinomas on the infected individual's head.

Today's popularity of the mi'raj kickstarted with the 1950 karkadann-centric paper Studies in Muslim Iconography I. The Unicorn, which covers the mi'raj in "Other unicorns in Muslim literature". In 1981, Dungeons & Dragons picked up the al-mi'raj in the first edition of the Fiend Folio. And from there, the al-mi'raj made it into the Eastern RPG space with its inclusion in Dragon Quest III in 1988. Dungeons and Dragons's take on the mi'raj largely follows the mythological details. It's a yellow hare with a single black horn and a temper, but it's also no more than a starter enemy. In Dragon Quest, the two primary variants of the mi'raj are grey and purple with a golden horn, more bunny than hare, and lack an intimidation factor.

The result of these two popular renditions is a creature that is principally treated as being as dangerous as a Cute Slime Mook. The mi'raj's horn is a fearsome weapon, but the mi'raj itself is a poor wielder better suited for detecting hostility and running away timely. Yet just as easily the mi'raj's expected weakness is inverted and the creature lives up to the myth. This often goes hand-in-hand with the vorpal bunny archetype and may or may not come as a surprise to whomever encounters a mi'raj.

See also unicorn, a horse with one horn, and the jackalope, a rabbit with antlers likely also inspired by rabbits infected with the Shope papilloma virus.

Makara is an aquatic monster in Hindu lore. It means "sea dragon" or "water monster" in Sanskrit and relates to "magar", the Hindi word for "crocodile". Its depictions vary widely through history, but it's always a hybrid creature that is at home in the water and capable of going on land. The front may resemble a short-snouted creature, but more often the makara has an elongated face like an elephant, crocodile, or dolpin. The makara may have any number of legs: none, two, or four, and while variaties to its hind exist it usually ends in a fish tail.

The makara ranks among the vahanas, divine mounts, and are known to carry Ganga and Varuna. Other gods wear makara-shaped earrings and Kamadeva has the makara as his insignia. Statues of makaras are commonly in use as guardians of gateways of important buildings, and also are in use as waterspouts.

Cross-culturally, makara are the Zodiac counterpart to capricorns and may be one of the inspirations to the Japanese shachihoko. It's theorized they may be an adaptation of the Greek ketos.