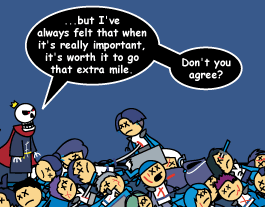 . If you want to, that is.
[A] person is almost always forgivable...'Almost' being the key word here. But you have passed that point of no return now, and I will never forgive you for what you've done here tonight. Trying to kill an innocent person out of greed... You are incapable of redemption.
— Suicide for Hire

Comics with their own pages